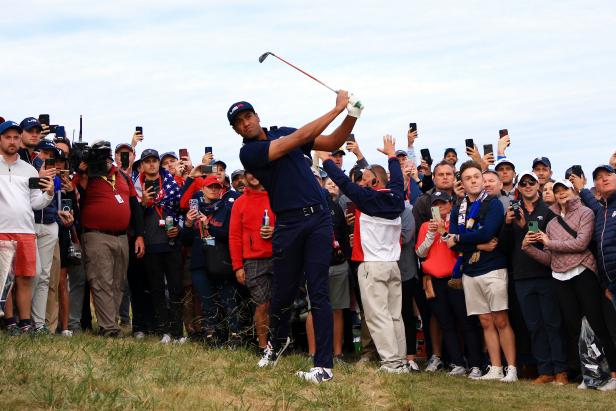 There is no doubting the grit of Tony Finau. This is a man, after all, who dislocated his ankle the day before the start of the 2018 Masters and turned in a 68 in his opening round. But this tale about Finau’s lead-up to the recent Ryder Cup underlines how tough he truly is.

Chalk this up as getting lost in the afterglow of the American victory, but Finau dropped a tasty nugget on his podcast last Friday: the American star was so sick days before the Ryder Cup that he worried he won’t be able to compete at Whistling Straits.

Speaking on his “Let’s Get It” podcast with coach Boyd Summerhays, Finau said he came down with a cough the week before the biennial match at a charity event at Liberty National that quickly became something worse.

“I started to kind of feel a little crummy,” said Finau on his podcast. “When we start to come down with something these days, what’s the first thing you think about? COVID. It’s like 100 percent. I had it exactly a year ago. So, a lot of these thoughts started to go through my head, like, ‘oh my gosh.’ I was like, ‘please, not COVID, not now.’ ”

Finau had a bout with COVID-19 in October 2020, an experience Finau noted at the time by saying “[The virus] got me really good.” Knowing he would need to test negative three days before the Ryder Cup and again at Whistling Straits, Finau flew from Newark to his home in Salt Lake City, only for his illness to get worse on the flight.

“I just balled up and threw my hoodie on and I had the chills the whole ride,” Finau said. “I shivered for five straight hours. I had a fever. It was like the longest flight ever.

“I walked off the plane looking like I needed help, like a cane, or someone needed to push me in a wheelchair. It seemed like every bone in my body was aching.”

A Tuesday COVID test produced a negative result, but Finau continued to feel lousy to the point where he visited the emergency room. He was administered another test with another negative result. “I was like, Hallelujah,” Finau said. “I was just waiting to get a positive test. This is going to happen. There’s no way it’s not.”

An x-ray revealed Finau had an infection in his left chest and pneumonia. Though it was a relief, Finau didn’t touch a club for the next few days, opting for rest. “My whole preparation was just getting my mind wrapped around can I even play?” Finau explained.

Despite not feeling 100 percent, Finau said the competitive juices kicked in and were able to get him through the week. Finau ultimately went 1-2 in three matches, but his electric performance on Friday helped the Americans build an insurmountable 6-2 lead. Following the Ryder Cup, Finau dropped out of the Dunhill Links at St. Andrews citing a persisting health issue.

“The only way I’m not playing in the Ryder Cup is if I had COVID. If I can barely walk, I’m playing,” Finau said. “That’s how I roll.”

World No. 26 Casey latest to defect to LIV tour
How to hit a high shot over a bunker. Easy golf tips
GOLF SWING TRANSITION (Change How You Think)
Poston ‘rides momentum,’ up 4 at Deere Classic
At LIV Golf, the Saudi controversy stops at the Pumpkin Ridge gate