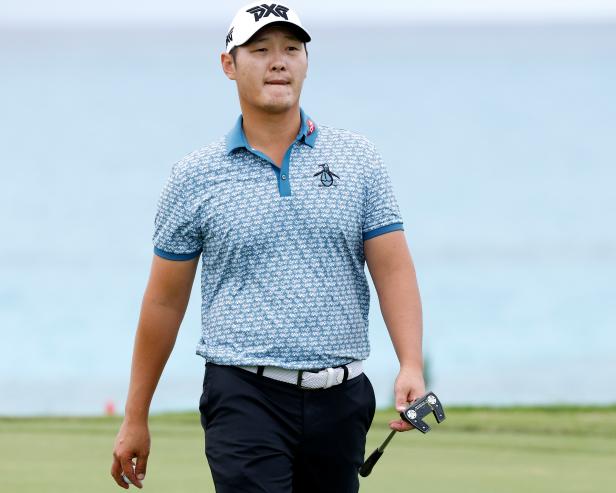 That bromide about “it’s not how you start, but how you finish” took on extra meaning for Danny Lee Friday at the Butterfield Bermuda Championship. He currently is playing on a minor medical extension and nearly caused another player a medical issue of his own.

Lee, a former U.S. Amateur champion, is winding down on his medical extension with three events remaining to earn 289 points to regain full PGA Tour status. A solo second this week at Port Royal Golf Course would do the trick, while a solo fourth would sew up conditional status. He appears poised to make serious inroads on that goal after a second straight four-under 67 has him tied for fourth, three behind leader Taylor Pendrith.

Rebounding from a rib injury that sidelined him for two months, Lee finished his second round in Bermuda in stellar fashion, recording an eagle followed by three birdies in succession on his inward nine, starting at the par-4 fifth hole.

“To be honest, I haven’t really made the cut in a while and I haven’t played in a while, so I was just trying to make it to the weekend,” said Lee, who missed the cut in his only other start this season, the Fortinet Championship, and hasn’t played on the weekend since mid-June at the Palmetto Championship. “I was just grinding it out. That one lucky shot on No. 5 and just kept going, like momentum was building in positive ways and kept making putts and a lot of birdies coming in.

“Definitely where I’m at is a very good spot to be in after first two rounds.”

Lee definitely was not in a good spot starting out. Beginning his day on the 10th hole, he pumped his first tee shot far right. The ball found the cart path and bounded out of bounds. He reloaded, found the green with his second tee ball on the 350-yard par-4 and one-putted for a ho-hum par.

Well, it wasn’t quite so ho-hum. When he got to the green, Lee apologized to the group that was still on it, which included Patrick Rodgers, Scott Gutchewski and Michael Kim. Turns out he almost hit Gutchewski with his second tee shot.

“I’ve been getting a lot of DMs about No. 10,” Lee said before concluding his post-round interview. “At that time when we showed up on No. 10, I mean, first of all, I apologized to everybody, and I apologized to Scott. I watched it on TV, too, how close it almost hit him. I mean, Jesus, thank God it didn’t hit him.

“But at the time when we showed up on the 10th tee, they weren’t even on the fairway. I gave another five to seven minutes and then I hit my first one way right, hit the cart path, went 90 yards right. So even then no one said, ‘They’re still on the green, you should wait,’ or anything like that.

“So, I obviously hit my provisional, hit a better line, landed on the green and some of the people were like, ‘What are you doing? Like did you not know they were on the green?’ But I didn’t, I honestly didn’t. I apologized to everybody. I just want to make sure that I apologize to everybody. I mean, there’s no excuse for it, it’s my fault hitting up there, but I just want to clarify things.”

Hey, now that’s how you finish.

Justin Lower scraped around for more than a decade on the, ahem, lower levels of golf, including three full seasons on the Korn Ferry Tour, before graduating to the PGA Tour, thanks to grabbing the last spot in the Korn Ferry Finals in September.

The former NAIA Nicklaus Award winner from Akron, Ohio, therefore, is easy to root for as his journey continues, and in his second tour start he has a decent chance to do something he never did on the Korn Ferry (though 16 times at Malone University, plus an Ohio high school state title), which is register a victory.

With a three-under 68 Friday, Lower completed 36 holes in seven-under 135, four strokes behind Taylor Pendrith. We don’t know what Lower thinks because he hasn’t been interviewed after either of his first two rounds despite being in contention.

We’re going to guess that, given all he’s been through to simply get to the tour, Lower, 32, likes his position. And considering that his only other start was at the Fortinet Championship, he’d probably be rather pleased with a top-10 finish, which would assure him a start in next week’s World Wide Technology Championship at Mayakoba in Mexico.

… And much higher expectations

Playing in the morning wave Thursday, when the scoring average was three strokes higher than those who teed off in the afternoon, rookie Taylor Pendrith was just trying to “hang on,” as he described his one-under 70. Pretty good hang.

In calmer conditions on Friday, he nearly hung a 59 on the field.

With nine birdies and an eagle against a lone bogey, the Canadian golfer fired a 10-under 61 at Port Royal to snatch the midway lead from Patrick Rodgers at 11-under 131. The Kent State University product needed birdies on the last two holes for the magic number but went cold at the end, including a lip out from eight feet at the last. Nevertheless, Pendrith broke the previous course record of 62 shared by Scottie Scheffler and Brendan Todd.

“It was nice to make five in a row on the front. I knew there was a couple scorable holes coming in, but I was trying to make as many birdies as possible and see what happens,” said Pendrith, 30, a Korn Ferry Finals graduate playing in just his 13th PGA Tour event. “I had a couple good looks that didn’t go in—the one on the last hole was a nice look, but obviously super pleased with the round.

After playing his opening nine in four under, Pendrith opened his second nine with five straight birdies, keyed by a three-footer at the par-4 first hole, where his approach hit the flagstick. Then his putter caught fire as he made a series of mid-length putts, the shortest a six-footer at the par-3 third hole.

He did all this despite a lack of a practice round. Oh, and he got married two weeks ago, so, overall, he had, um, other things to do beside play much golf.

“I was very calm all day,” Pendrith said. “Obviously, it’s Friday, so I’m just trying to put myself in a good position to make as many birdies as possible. It’s been a dream start. I didn’t hit one shot on the golf course Monday, Tuesday, Wednesday, so I didn’t see any of the holes, so to be in this position is great. Probably won’t do that more often, but it’s pretty surprising.”

Want to know if a guy might have a future in this game? Just look at how freshman Sahith Theegala finished his second round.

The rookie from Orange, Calif., who won the 2020 Haskins Award, the Jack Nicklaus Award and the Ben Hogan Award during his All-American career at Pepperdine, was three over par and outside the cutline by three shots after 10 holes. He decided that leaving Bermuda early didn’t sound like a palatable way to spend his Friday afternoon, so he birdied five of his last six holes.

Sometimes, what you do on a Friday in scraping out a weekend tee time can mean as much as anything done on a Sunday—short of a win, that is.

How to hit a high shot over a bunker. Easy golf tips
Poston stays hot, up 2 in Deere Classic after 62
Fox claims 1-shot lead after Day 1 at Irish Open
Here’s the prize money payout for each golfer at the 2022 LIV Golf Invitational Portland
Tiger Woods is playing in a tournament on Monday in Ireland. So what is the J.P. McManus Pro-Am anyway?