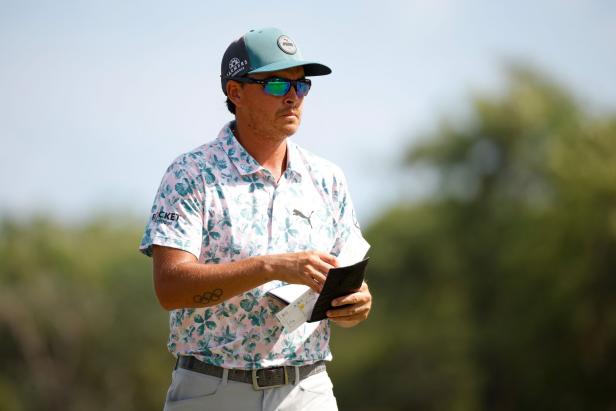 Rickie Fowler was on a roll. The five-time PGA Tour winner had recently posted his best finish in two-and-a-half years, he’d shot 66 on Thursday and he began Friday with a pair of birdies to pull within a few strokes of the lead. Then, suddenly, the good times were over quicker than you can say World Wide Technology Championship at Mayakoba.

Golf has a way of humbling even the world’s best players, but Fowler’s second-round stumble was particularly surprising considering it started on two of El Camaleon’s easiest holes. First, his second shot on No. 5 found a penalty area, leading to a bogey. Then on No. 7, he hit his tee shot into the native area and made double bogey.

Two par 5s. Three over par. Just like that, Fowler went from contending again to battling just to make the cut.

But thanks to a scrambling par on No. 18—that again involved a brush with the native area—Fowler finished at four under through two days and right on the cut line. So while Rickie might not be all the way “BACK,” at least he’s back playing the weekend again.

Here are our other takeaways from Day 2 in Mexico.

Or, rather, his latest birdie barrage. We’ve all seen what this guy can do with that 59 at the 2020 Northern Trust. But he recently shot another sub-60 score at his home course, Royal Oaks Country Club.

Here’s a look at the scorecard that was shared earlier this week:

Scheffler didn’t go quite as low on Friday, but a bogey-free 64 that included five straight birdies from holes 4-8 puts him in second place at 11 under heading into the weekend. With the way Matthew Wolff (13 under) is playing, he’s going to be tough to beat. But if anyone has the firepower to track him down, it’s Scheffler.

Last season was billed as the Year of the Comeback on the PGA Tour, but Bill Haas is poised for a pretty big one himself. The six-time winner who hasn’t had a top 10 in more than two years is in contention at nine under following a second consecutive bogey-free round.

In fact, Haas had fallen so far that he entered the week as a 500(!)-to-1 longshot. (Yeah, I’m kicking myself for not throwing a few bucks on my fellow Wake Forest classmate.)

Not that anyone could have seen this coming. The 2011 FedEx Cup champ simply hasn’t been the same player since being involved in a fatal car accident on the eve of the 2018 Genesis Open, something our Dan Rapaport spoke to Haas about after his round.

Haas hasn’t finished better than 140th in the FedEx standings in the four seasons since the accident, including ending last season at 197th when he missed the cut in 15 of his 20 starts and had only one top 25—a T-25 at the Palmetto Championship.

“I’m always working on something, and I’ve been grinding for seems like three years now on trying to figure out what’s going to be consistent and what’s going to help me get over that hump,” Haas said on Friday. “Right now, I have a swing thought that seems to be working OK. And I want one to last for more than two days. I’d love for it to continue this way and hopefully have a nice few months instead of just two days.”

There’s no rooting from the press box, but I’m rooting for you, Bill. Even if it means I’ll regret not betting on you even more.

There are no fans at this week’s tournament (only resort guests, player guests and corporate hospitality), but if there were, they’d be pretty happy about how Carlos Ortiz has played so far. The 30-year-old Mexican shot a second-round 65 and is tied for third with defending champ Viktor Hovland through 36 holes.

Ortiz withdrew following the second round of the Zozo Championship two weeks ago in his last start due to shoulder tendinitis. But apparently, home-cooking can be a heckuva drug.

“I always said I feel like … just the vibe that Mexican culture has that as soon as you walk in the hotel or at the airport, the golf course, you just feel this vibe from everyone that makes me have a good week, I guess,” Ortiz said. “I really feed off that and I really enjoy being here. I always said I don’t feel like I’m playing a tournament, it feels like I’m on vacation and playing with a couple buddies, especially playing with Abe and Sergio was super fun and I really enjoyed it.”

It’s just too bad there aren’t more people at the course this week to enjoy it as well.