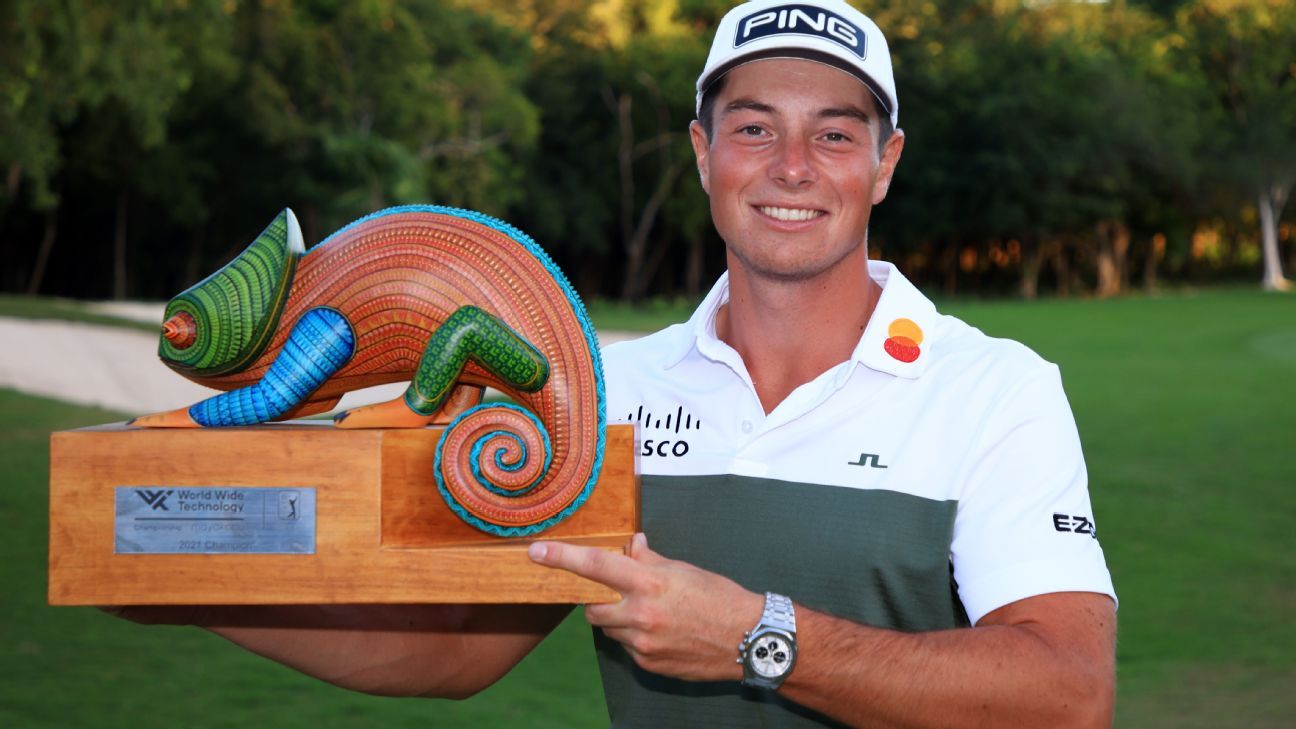 PLAYA DEL CARMEN, Mexico — Viktor Hovland won again on the PGA Tour, this time without a clutch finish. The Norwegian star was too dominant to give anyone else a chance Sunday in the World Wide Technology Championship at Mayakoba.

Hovland seized control with three birdies on the front nine, and never let Scottie Scheffler, Justin Thomas or anyone else get closer than three shots the rest of the way.

He closed with a 4-under 67 for a four-shot win over Carlos Ortiz of Mexico, making him the first repeat winner since Mayakoba began in 2007.

Hovland won last year with a birdie putt on the final hole for a one-shot victory. He also made birdie on his last hole when he won the Puerto Rico Open in the spring of 2020.

There was no need for that this time. For the final two hours, everyone was playing for second.

“I wish I could putt like I did today more often,” said Hovland, who made 28 birdies for the week at El Camaleon. “It was just a blast all week.”

Thomas had an early bogey and didn’t make as many birdies to make up a three-shot deficit on Hovland, especially the way Hovland was putting.

“I just didn’t drive it well, didn’t get off to a good enough start to really put any pressure on Viktor,” Thomas said.

The strongest challenge came from Scheffler, who starred on the final day in the Ryder Cup and is hopeful his first PGA Tour victory is around the corner. Sunday wasn’t the day.

Scheffler missed a pair of short-range birdie putts only to ram in an 18-foot birdie on the 12th to get to within three shots. Hovland answered with a 35-foot birdie putt on No. 9, and the lead was back to four shots.

Scheffler’s chip just right of the 13th green hit the pin and bounced about 5 feet away, which he made for eagle. Hovland made an 18-foot birdie putt on the 11th moments later.

Scheffler blinked first. His tee shot on the 16th peeled to the right into the mangroves. After a penalty drop, he did well to get it up near the green, only to have mud on his ball and watch his long pitch go over the back onto the collar and make double bogey.

“Viktor’s playing some good golf so he’s obviously going to be tough to catch,” Scheffler said. “I had to make a few more birdies towards the end and wasn’t able to do that.”

Matthew Wolff, the 36-hole leader who fell out of the mix with a 74 in the third round, bounced back with a 65 on Sunday to tie for fifth with Joaquin Niemann (66).

Hovland is the fifth consecutive foreign-born winner on the PGA Tour, a streak that began with Sungjae Im of South Korea winning in Las Vegas. He was followed by Rory McIlroy of Northern Ireland, Hideki Matsuyama of Japan and Lucas Herbert of Australia.

Tiger out of Hero World Challenge with foot injury
Adam Scott is changing up more than his caddie to be ready for the 2023 season
Phil Mickelson defends stance on PGA Tour money reserves following Tiger Woods’ comments
Tiger, son Charlie, to return to PNC Championship
I thought I was dying. How golf kept me going