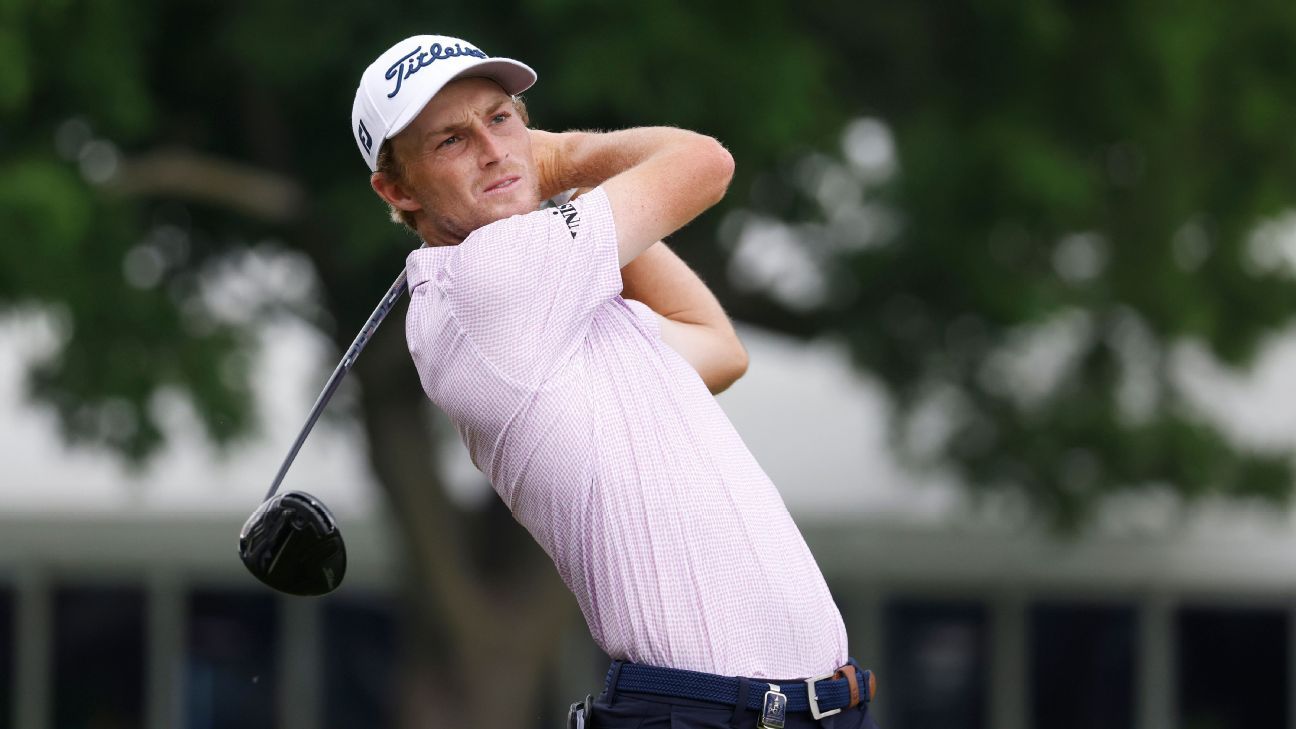 TULSA, Okla. – Phil Mickelson, the defending PGA Championship winner, wasn’t at Southern Hills Country Club this week to defend his title. Scottie Scheffler, the No. 1 player in the world who won the Masters a month ago, won’t be around for the weekend.

But there will still be plenty of intrigue this weekend, as two of the sport’s biggest stars, Justin Thomas and Rory McIlroy, will try to end long droughts without winning a major championship.

They’ll be chasing Will Zalatoris and Mito Pereira, who has never even won a PGA Tour event, let alone a major. Neither have Abraham Ancer, Davis Riley and Matt Fitzpatrick, who are all within striking distance after 36 holes.

“Something Scottie Scheffler said the other day I think resonates a lot, where what made him become a major champion, he said that it was belief,” said Zalatoris, who is 9 under and has a 1-shot lead over Pereira after Friday’s second round. “I think that’s kind of the same attitude that any of us have out here to win, whether it’s a regular event, a Korn Ferry event, or a major. Maybe it’s a fake-it-till-you-make-it attitude, I don’t know.”

Here are five players to watch in the 104th PGA Championship this weekend:

The former Wake Forest star hasn’t yet won on the PGA Tour and claimed just one victory on the Korn Ferry Tour. But with some of the best ball-striking skills on the planet, it’s only a matter of time before he wins on tour — and at a major.

Zalatoris will try to become the first player since Martin Kaymer in 2010 and only the fifth in the past 50 years to get his first tour victory at the PGA Championship — Jeff Sluman (1988), John Daly (1991) and Shaun Micheel (2003) were the others.

There was never any doubt that Zalatoris could hit a ball straight — and any other way he wanted. The concern was what happened once the ball landed on the green. He came into this week ranked 185th on tour in shots gained: putting. Somehow, he ranks first in that category this week, gaining 3.090 on the field. He was a perfect 18-for-18 on putts inside 10 feet on Friday.

The good news for Zalatoris is that each of the past seven major winners at Southern Hills either led or had the co-lead after 36 holes.

“I’ve got a long 36 holes ahead of me,” Zalatoris said. “I think if anything, you’re able to plot your way around this golf course. If you hit as many greens as you possibly can, it’s kind of hard to mess it up. You still can. You know, if you get on the wrong slopes it still has a little bit of the attitude of, like, Augusta, where you can hit 18 greens and walk off that place and shoot 80.

“I’m going to go out and do my job. Hopefully, it’s enough at the end.”

Pereira, who grew up in Chile, started playing golf after watching his father play on the weekends. At 15, he quit playing and didn’t pick up his clubs for two years.

Now, a dozen years later, he’s one shot off the lead at the PGA Championship. He’s the first Chilean golfer to finish in the top two of a round at a major since 1983, according to research by ESPN Stats & Information. The 27-year-old is playing in just his second major. He hasn’t won on tour. He is ranked No. 100 in the world.

Make your picks and compete for a chance to win $5,000! Make Your Picks

“I took the two years off, but when I came back I knew I could do it,” Pereira said. “I knew I could get here, and I just kept the confidence. Obviously, there were some ups and downs, but really happy to be here.”

Pereira played one season at Texas Tech in 2014-15 before turning pro. He finished 129th on the Korn Ferry Tour and failed to pass through Q-School in 2018. When he returned to Chile, he fell off his bike and broke his collarbone.

Pereira is convinced all of those setbacks helped him get here.

“Wasn’t a very good year,” he said. “But since then I’ve been building and going up. Got some experience of everything — good days, bad days, bad golf, really bad golf, good golf. But I think everything has helped me out to be here and to play like I’m playing now.”

Outside of winning the Masters in 2012 and 2014 and finishing tied for fifth at Augusta National in 2018, Watson hasn’t had a great track record in majors (not that winning two green jackets is so bad).

But Watson hasn’t had a top-10 finish in any major other than the Masters since losing in a playoff and finishing second to Kaymer at the 2010 PGA Championship at Whistling Straits. Watson, 43, hadn’t finished in the top 50 at the PGA Championship since 2015.

Access 4,300-plus hours of live coverage from 35 PGA Tour tournaments each year, including four days of coverage at 28 events with four feeds each day. Plus, access replays, originals and more. Stream on ESPN+

But there Bubba was on Friday, shooting just the third 63 in a major at Southern Hills, joining Tiger Woods (2007 PGA) and Raymond Floyd (1982 PGA), who both went on to win the tournament.

“It’s an honor to be able to shoot 63 on any golf course,” said Watson, who is in solo fourth and four shots behind Zalatoris. “I mean, I’ll take it. But I’ve got to look forward to [Saturday] and see where I’m at.”

A couple of weeks ago, Watson ditched the driver shaft he’d been using since 2002 for one that is 30 grams lighter. He’s hitting the ball much farther and straighter off the tee. He ranks first in the field in strokes gained: tee to green and is averaging 318.1 yards on drives.

On the 13th hole on Friday, after Watson hadn’t missed a fairway, he told his caddie, Gabe Sauer, that he was going to deliberately hit his tee shot into the rough.

“I wanted to get that out of my head,” Watson said. “I hadn’t missed a fairway yet, and I didn’t want to go to 17 or 18 having a chance to hit every fairway.”

The former Alabama star is tied for fifth after consecutive rounds of 2-under 68. He is 5 shots behind Zalatoris.

Michael Collins is back for an all-new season of America’s Caddie. He’ll take you inside the world of golf with exclusive looks at some of the top courses, feature stories, celebrity guests and interviews with the biggest stars in golf. Stream on ESPN+

Riley, from Hattiesburg, Mississippi, came into the PGA Championship, his second major, on a nice heater. He had three straight top-10 finishes — a tie for fourth at the Zurich Classic (with teammate Zalatoris), solo fifth at the Mexico Open and a tie for ninth at last week’s AT&T Byron Nelson.

In March, Riley finished second at the Valspar Championship, losing to Sam Burns in a playoff. Since missing the cut at the RBC Heritage in mid-April, Riley has shot in the 60s in nine of his past 10 rounds in stroke-play events. He is a top candidate for PGA Tour Rookie of the Year.

“I knew ever since the beginning of the year I’ve been playing some good golf and I’ve been trying to stay patient,” Riley said. “It was nice. I knew I could do it at some point, but to finally have it come to fruition and have a chance to win a golf tournament like I did at Valspar, I felt like I really turned a page there.”

Last season was rather forgettable for Kuchar. He had just one top-10 finish in 25 tour starts, missed the cut in five of his past six starts and went 0-for-6 in the majors (which included the 2020 U.S. Open and Masters that were postponed because of COVID-19).

Kuchar, 43, has been much better this season. He has six top-25 finishes in 14 starts, including a tie for second at the Valero Texas Open and tie for third at the RBC Heritage.

He carded a 3-under 67 in the first round at Southern Hills, then followed it with a 1-over 71. He sits at 2 under, seven behind Zalatoris.

Kuchar credits his turnaround to being able to spend more time with swing coach Chris O’Connell.

“I’m starting to gain some control of the golf ball again, starting to be able to kind of predict a little bit what’s going to happen,” Kuchar said. “I struggled there for a little while. I didn’t really know if the ball was going to go left or right, and now I kind of have a good feel for which way the ball is going to go. I feel like if I can somewhat predict the outcome I can point it in the right direction and kind of do OK.