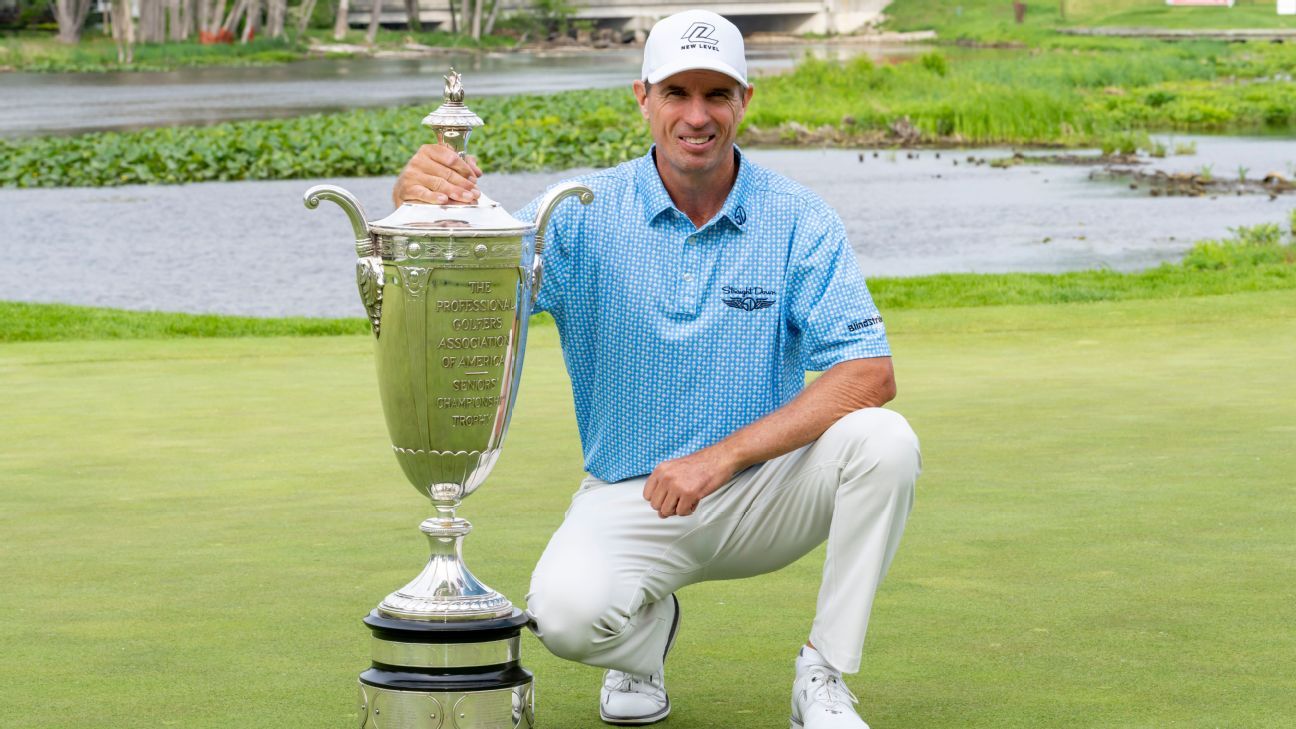 BENTON HARBOR, Mich. — Ten months ago, Steve Alker was about to turn 50 without any guarantees of getting on the PGA Tour Champions because his professional career left plenty to be desired.

Over three decades, he played more than 550 tournaments on six tours. Only three of those seasons were on the PGA Tour. Two other seasons were in Europe.

Now the New Zealander is the hottest player on the senior circuit.

His latest and greatest feat came Sunday at Harbor Shores by Lake Michigan when Alker overcame a four-shot deficit by making nine birdies in a closing 8-under 63 to capture the Senior PGA Championship.

His three-shot victory over Stephen Ames was Alker’s fourth in his past 11 tournaments.

“It’s been a great ride out here, and I’m enjoying myself,” said Alker, who earned $630,000 with his third victory of the year, pushing his season earnings to just over $1.8 million. “The first couple of weeks were OK. I wouldn’t say I’m comfortable yet, but just comfortable playing with the guys out here.”

Alker’s amazing play this season has certainly impressed his colleagues, especially Ames, who managed a 70 to finish runner-up. Bernhard Langer, the 64-year-old wonder from Germany, briefly tied for the lead on the back nine and shot 71 to finish third.

“I’ve watched Steven play on the European tour and the Korn Ferry Tour,” said Ames, whose round included four birdies and three bogeys. “All of a sudden out here, wow. It’s fantastic, great to see.”

“It’s just perseverance with a capital P,” Alker said about his career turnaround.

Alker, who birdied three of his first five holes, bogeyed the difficult 443-yard seventh but then ran off four birdies in a row beginning at No. 8. He added birdies Nos. 15 and 16 to close the door on the competition.

Alker, who played in the penultimate group Sunday, was comfortable chasing Ames, Langer and Mike Weir.

“I was very, very calm,” he said. “I wanted it but I had a lot of ground to make up. I didn’t want to push too hard and go too aggressive. So I got a nice start, made some nice putts. I just kind of did everything well today.”

Ames, who had a share of the 36-hole lead with housemate Scott McCarron at 8 under and was the solo 54-hole leader by two strokes over Langer and Weir, said Harbor Shores played differently Sunday because of warmer temperatures in the low 80s and south-southwest wind gusting to 25 mph.

“The lines and clubs were different off the tee, but I think everybody adjusted well,” Ames said. “Obviously, some played better than others.”

One who didn’t was Langer, who now has four top-10 finishes at Senior PGAs played at Harbor Shores but not a victory. Seeking his 12th senior major title, Langer bogeyed three straight holes starting at No. 12 for a closing 71 and a 10-under 274.

Langer, who made four birdies on his front nine, had to play out of two divots at the 548-yard 10th before managing to save his par 5.

“That really stopped the momentum,” said Langer, who then bogeyed Nos. 13-15. “It was obviously a missed opportunity. I was 14-under leading by one with eight holes to go and just didn’t close it.”

Ames birdied Nos. 2 and 3 to build a three-shot lead at 14-under. But Ames gave a stroke back with a bogey at the difficult seventh hole overlooking Lake Michigan, and Alker, Langer and others began to close in.

Langer caught Ames at 13 under with his third birdie of the day at No. 8 and then added another birdie at par-5 ninth to turn at 14 under.

Alker, meanwhile, started the day with four straight 3s, two of them birdies, and then after bogeying the seventh, strung together four birdies beginning at the short 376-yard eighth hole to reach 14-under through 11.

When Ames birdied the 133-yard 11th, he joined Alker and Langer in a three-way tie, and they had effectively separated themselves from the rest of the field.

The three-way tie didn’t last long as Langer made bogey from the fairway at the 12th, and then he hooked his tee shot at the 193-yard 13th into the rough on way to a second straight bogey to fall two back at 12-under. He and Ames then bogeyed the par-4 14th.

Up ahead, Alker made birdie at the 508-yard, par-5 15th by the Paw Paw River and he suddenly found himself in control of the tournament at 15-under. His final birdie at 16 and two par saves on the closing holes secured the title.

Golf Swing – Improve Your Pitching Distance Control
Judge rejects LIV trio’s bid to play in FedEx Cup
Jon Rahm and wife Kelley welcome second son into family on eve of the playoffs
HOW TO CHIP IN GOLF have I Transformed my Short Game
Never Do This One Thing when Rotating in your Golf Swing!