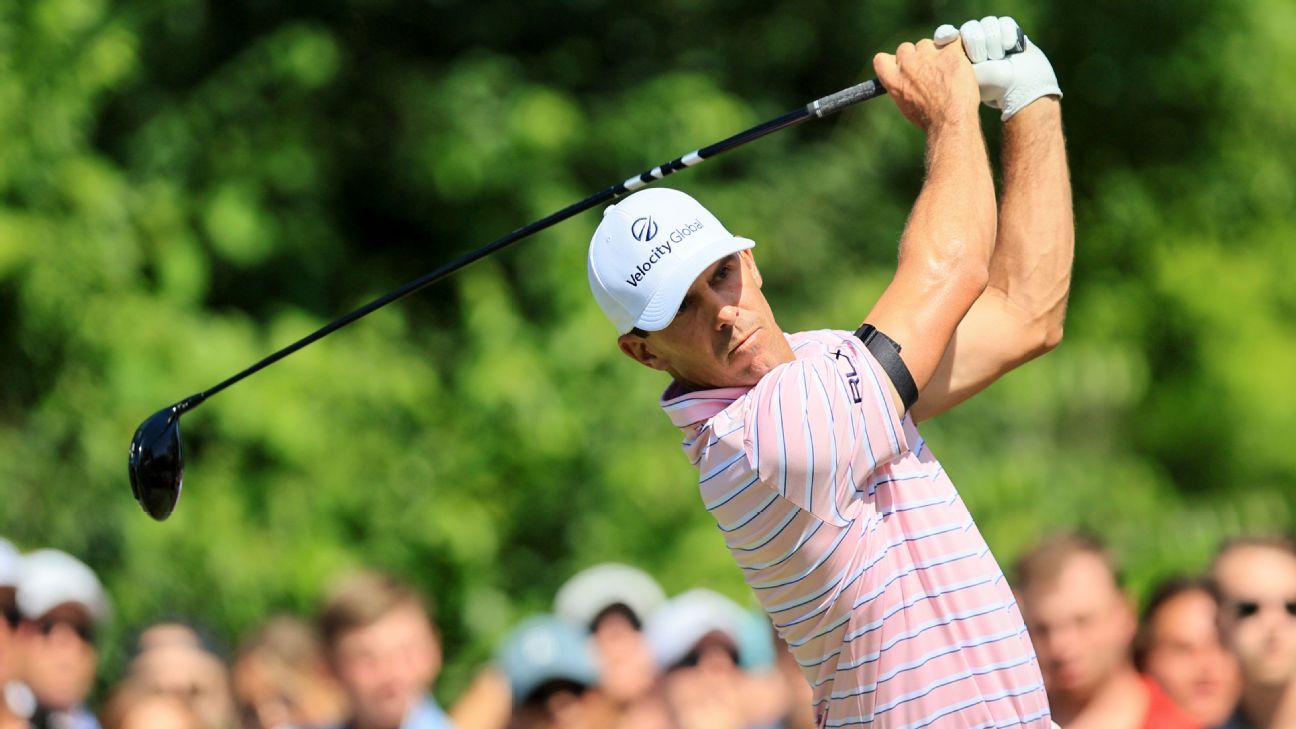 DUBLIN, Ohio — Billy Horschel is more concerned with the way he is playing than the size of his lead in the Memorial. Either way, he’s in good shape going into the final round.

On a Muirfield Village course that is getting increasingly firmer, Horschel hasn’t made a bogey since the 10th hole of his opening round. There were five players tied for the lead at one point. Horschel finished the day five shots ahead.

It was the second straight year for a big 54-hole lead at the Memorial. Horschel at least get a chance to finish the job.

One year after Jon Rahm built a six-shot lead – only to be forced to withdraw after the third round because of a positive COVID-19 test – Horschel delivered a gem on a gorgeous Saturday afternoon with a 7-under 65 for his largest 54-hole lead of his career.

Horschel chipped in for birdie on his opening hole. Everything else was simply solid, with only one other birdie putt outside the 10-foot range.

“I just go to the tee understanding I’m leading the tournament. I know I’ve got however many shots I have ahead,” Horschel said. “I’m not going to be protective, I’m not going to be overly aggressive. I’m going to play the way I have the last three days. We’re going to hit the golf shots that are required, and I know if we do that it’s going to give me the best chance to be victorious come tomorrow.”

He will be going for his sixth individual title and seventh PGA Tour victory.

Daniel Berger had a 67 and six shots behind along with Jhonattan Vegas and former British Open champion Francesco Molinari, who hasn’t had a top-five finish since the 2019 Masters.

“I’m just happy to be up there,” Molinari said. “Billy is a really good player, but in golf you never know. On a course like this, it’s showing today that if you hit the fairways you get plenty of chances and you can shoot 6-, 7-under par. If you start missing fairways it’s a whole different challenge. I think there’s going to be an outside chance, but it’s just nice to be kind of up there.”

Smith started with a one-shot lead and ran into trouble immediately, with bogeys from the bunker on the first two holes. He played alongside Denny McCarthy, who on three occasions in the first hour was putting for birdie from closer than where Smith was putting for par.

It was a struggle for Smith to get back to even for the day, but by then, Horschel was starting to pull away from everybody.

He took the lead with a wedge to 3 feet for birdie on the par-5 seventh, and then stuffed his tee shot to a front pin within 6 feet on the par-3 eighth. He made birdie on all the par 5s. The four times he missed the green, he chipped in on No. 1 for birdie and made tough saves from bunkers and a delicate pitch behind the 12th green that ran quickly away from him.

Smith saved himself one shot at the end. The greens are firm enough that anything in the rough makes it hard to stop near the hole. Smith’s shot from deep grass right of the 18th fairway bounded to the back of the green with a front pin. The Aussie went with a flop shop that trickled near the hole and settled 3 feet away for par.

“It was a nice one to get par out of,” Smith said. “There was lots of not-so-good stuff out there today, and just stuck in there. Managed to have a couple of birdies on that back nine. Just nice to get away with level par and keep myself in the tournament. I think especially today it could have got away from me a little bit.”

Rory McIlroy started the third round just three shots out of the lead, but as everyone else around him was piling up birdies, McIlroy was stuck on pars. He didn’t make his first birdie until the 11th hole and shot 73 to fall nine strokes off the lead.

Defending champion Patrick Cantlay began his round by pulling his tee shot into a stream and making double bogey. He atoned for that with a pair of eagles, finished with three straight par putts from outside 8 feet and shot 69. He was seven behind.

That would appear to be too far back – the largest comeback at the Memorial is five shots, most recently 15 years ago by K.J. Choi. Then again, players have rallied from seven shots behind to win the last two weeks by Sam Burns at Colonial and by Justin Thomas at the PGA Championship at Southern Hills.

“I wouldn’t be surprised if it’s any different,” Wise said. “Anything is possible.”

Why the PGA Tour needs to strengthen its ties with college golfers
Sept. 11 families to protest 1st LIV event in U.S.
Chun rallies past Thompson, wins Women’s PGA
Something fishy happened at the Missouri Am, raising concerns about favoritism in golf
I take on OPEN QUALIFYING! | Quest for the Open 2022 (Episode 6)