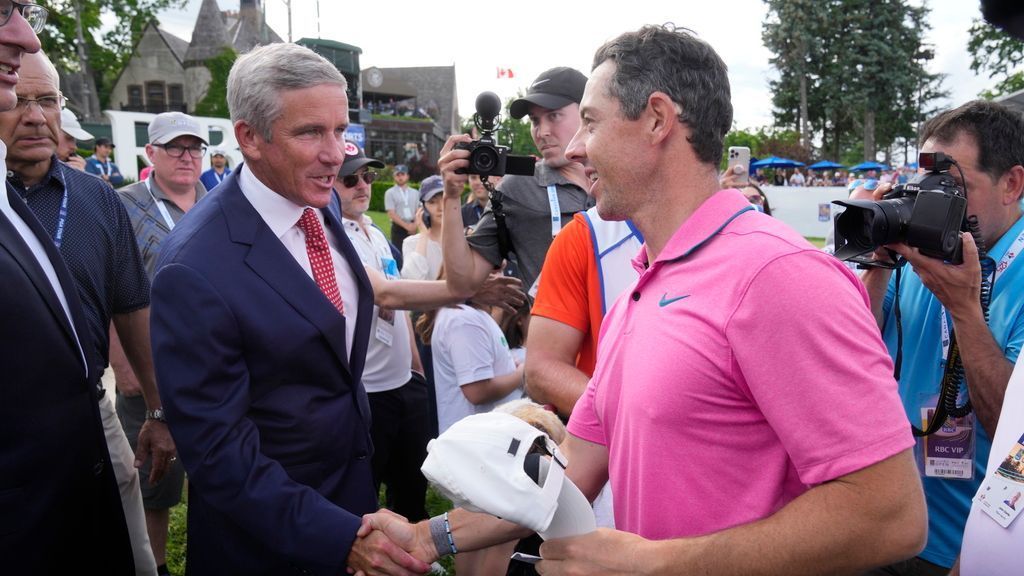 BOSTON — In his first interview since suspending 17 players for competing in the rival LIV Golf Invitational Series, PGA Tour commissioner Jay Monahan defended the punishment in an interview with CBS Sports during the final round of the RBC Canadian Open on Sunday.

Six-time major champion Phil Mickelson, two-time major winner Dustin Johnson and longtime PGA Tour members Sergio Garcia, Lee Westwood, Louis Oosthuizen and Kevin Na are among those who are now ineligible to compete in tour events after playing in the inaugural LIV Golf tournament in London this past week.

“It’s been an unfortunate week that was created by some unfortunate decisions, those decisions being players choosing to violate our tournament regulations,” Monahan said. “It’s my job to protect, defend, and celebrate our loyal PGA Tour members, our partners and our fans. And that’s exactly what I did. And I don’t think it was a surprise to anybody, given how clear I had been about how we were going to handle this situation.”

The next LIV Golf tournament will be played in the United States, at Pumpkin Ridge in Portland, Oregon, from June 30-July 2. LIV Golf announced over the weekend that it added former U.S. Open champion Bryson DeChambeau, former Masters winner Patrick Reed and Pat Perez to its roster. They are scheduled to compete in Portland.

Monahan said players who competed in future LIV Golf events would face the same punishment as the 17 players who were suspended last week. When Monahan was asked why players couldn’t compete on both the PGA Tour and LIV Golf circuit, he didn’t back down from his previous position that players had to choose one tour or the other.

“Why do they need us so badly? Because those players have chosen to sign multi-year lucrative contracts to play in a series of exhibition matches against the same players over and over again,” Monahan said. “You look at that versus what we see here today, and that’s why they need us so badly. You’ve got true, pure competition. The best players in the world are here at the RBC Canadian Open, with millions of fans watching, and in this game, it’s true and pure competition that creates the profile in the presence of the world’s greatest players.

“And that’s why they need us. That’s what we do. But we’re not going to allow players to freeride off of our loyal members, the best players in the world.”

Monahan was also asked about players being criticized for competing in a circuit that is being financed by Saudi Arabia’s Public Investment Fund. Survivors and family members of victims of the terrorist attack of Sept. 11, 2001, have been critical of players downplaying the Saudi Arabian monarchy’s history of civil rights violations.

“It probably is an issue for players that chose to go and take that money,” Monahan said. “And I think you have to ask yourself the question, why is this group spending so much money, billions of dollars, recruiting players and chasing a concept with no possibility of a return? At the same time, there’s been a lot of questions, a lot of comments about growth of the game. And I asked, how is this good for the game that we love?”

“I talked to players. I’ve had a player meeting and I’ve talked to a number of players individually for a long period of time. And I think you’d have to be living under a rock to not know that there are significant implications. And I would ask any player that has left or any player that would consider leaving, have you ever had to apologize for being a member of the PGA Tour?”

Alex Fitzpatrick on his professional debut, his brother Matthew’s success and turning down LIV
Poston ‘rides momentum,’ up 4 at Deere Classic
The GAME CHANGER Golf Tip That Helps All Golfers
How to watch the 2022 John Deere Classic at TPC Deere Run
Highlights: KPMG Women’s PGA Championship, best shots from Round 4 | Golf Channel