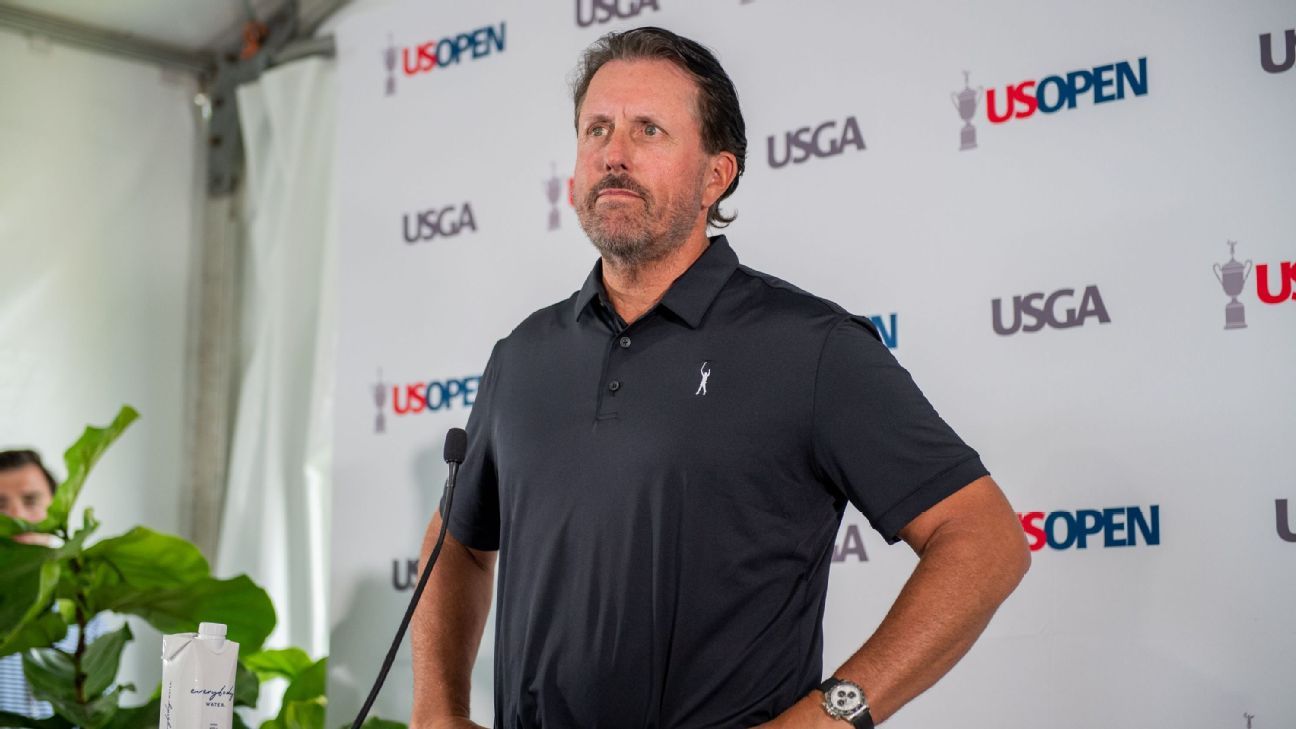 Mickelson’s scheduled news conference, his first in the United States since he took a leave of absence from competitive golf in February and his first since he competed in the LIV Golf Invitational Series, was 14 minutes away. As two golf carts waited to escort him to the overcrowded tent where it would take place, Mickelson simply waited. For just over 10 minutes, he stayed seated in his car and barely moved. His manager, Peter Davis, opened a door and sat with him.

By the time Mickelson exited the vehicle, all eyes were on him. He emerged wearing all black — the stubble and the no-hat look from last week’s LIV appearance outside London remained (Mickelson said he’s kept his facial hair because his wife, Amy, likes it). The blacked-out Augusta National logo that made a brief appearance last week on his vest was gone, and no other sponsors or logos were present on what he wore but his own. His 2022 U.S. Open player badge bearing his name was fastened — a sign that he had already been on location.

Mickelson stepped into the cart being driven by Davis and greeted the police officers escorting him in the cart ahead.

“How are you guys doing? Thanks for all your help,” he said sheepishly. The short drive to the interview area gave way to Mickelson stepping up to the podium, giving a statement and then asking, “Any questions?”

Mickelson, who has famously vented his frustration with the USGA and golf’s other governing bodies during his career, pondered his answers and carefully chose his words while answering what next came his way.

“I have had strong opinions and ideas, let’s say, regarding most of the governing bodies, and I’ve done a poor job of conveying that,” Mickelson said. “I’ve made it public, and that’s been a mistake. That’s one of the mistakes I’ve been making, and try to going forward be a lot more thoughtful with my words and actions and try to keep a lot of those things behind closed doors.”

Of course, sharing his opinion of the PGA Tour’s “obnoxious greed” and his feelings about the financiers of the LIV Golf Invitational Series, Saudi Arabia’s Public Investment Fund, with author Alan Shipnuck is what landed Mickelson in hot water to begin with earlier this year. Mickelson and 16 others players who competed in the inaugural LIV Golf event were suspended by PGA Tour commissioner Jay Monahan on Thursday.

During a news conference that lasted about 25 minutes, Mickelson, who will attempt to complete the career Grand Slam in his 31st U.S. Open start, faced myriad inquiries:

• Mickelson was asked about a letter he and other players who competed in last week’s LIV Golf event received from Terry Strada, a widow with three children, whose husband was killed in the terrorist attacks of Sept. 11, 2001. Strada is the national chair of the 9/11 Families United coalition.

“Given Saudi Arabia’s role in the death of our loved ones and those injured on 9/11 — your fellow Americans — we are angered that you are so willing to help the Saudis cover up this history in their request for ‘respectability,'” Strada wrote. “When you partner with the Saudis, you become complicit with their whitewash, and help give them the reputational cover they so desperately crave — and are willing to pay handsomely to manufacture.”

In the letter, Strada noted that Osama bin Laden and 15 of the 19 hijackers were Saudis.

Mickelson reportedly received a signing bonus of $200 million to sign up with LIV Golf.

Mickelson was later asked if he would speak to or write to members of the coalition. He declined to answer the question directly.

In a statement to ESPN later Monday, Strada said Mickelson and other LIV players should be “ashamed” of what they’re doing.

“They are helping the Saudi regime ‘sportswash’ their reputation in return for tens of millions of dollars, at the very same time our government is rolling out more damning evidence of Saudi culpability in the 9/11 attacks,” she wrote. “As the PGA Tour commissioner said Sunday ‘you’d have to be living under a rock’ to not understand the implications of involving yourself with the Saudis.”

• Mickelson said he plans to play in the remaining seven LIV tournaments this year and the 150th Open Championship at St. Andrews in Scotland, which is scheduled from July 14 to 17.

He was asked whether he wants to compete in PGA Tour events in the future.

“My preference is to be able to choose which path I would like, one or the other or both. I feel that I gave as much back to the PGA Tour and the game of golf that I could throughout my 30 years here, and through my accomplishments on the course I’ve earned a lifetime membership. I intend to keep that and then choose going forward which events to play and not.”

When Mickelson, 51, was asked whether he was at peace with perhaps never playing on the PGA Tour again, he added, “I am, again, very appreciative of the many memories, opportunities, experiences, friendships, relationships [the] PGA Tour has provided, and those are going to last a lifetime. But I’m hopeful that I’ll have a chance to create more.”

• Mickelson, one of the most popular players in the sport during his long career, was asked about how he thinks fans will react to him this week outside of Boston. The Country Club was the site of the 1999 Ryder Cup, in which American Payne Stewart had to ask fans to take it easy on Scotland’s Colin Montgomerie.

Mickelson will tee off in the first round Thursday at 1:47 p.m. He is playing with Ireland’s Shane Lowry and South Africa’s Louis Oosthuizen; Oosthuizen also played in the LIV Golf event last week.

“I think the Boston crowds are some of the best in sports, and I think that they have given me a lot of support, and I’m very appreciative of that over the years,” Mickelson said. “I think that their excitement and energy is what creates such a great atmosphere, so whether it’s positive or negative toward me directly, I think it’s going to provide an incredible atmosphere to hold this championship. I think it’s going to be a great event, and the people here have a lot to do with that.”

By the time the news conference was over and Mickelson was escorted back to his car, he didn’t waste any time and peeled off the property as quickly as he had driven in. All other players who cycled through the clubhouse Monday stopped to interact with others before heading over to the driving range or the putting green. Even Dustin Johnson, who also played in the inaugural LIV event last week, took a moment to say hello to a few players.

But after having slipped into The Country Club on Sunday afternoon to work on his putting and go through the player registration process without fans or most players in attendance, Mickelson was gone in an instant.