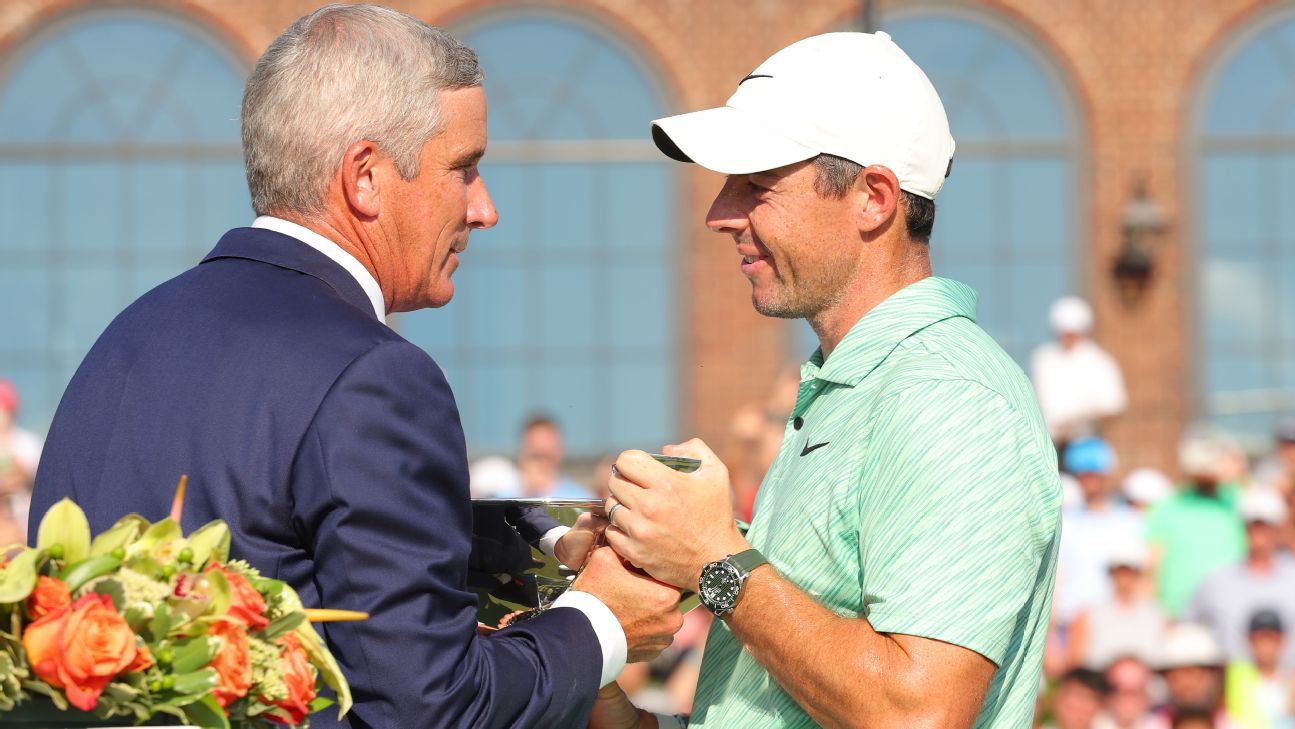 Monahan, who has had a difficult summer if you haven’t heard, had a big smile on his face.

Monahan knows that no matter which players LIV Golf takes from the PGA Tour on Monday, or in the coming days, weeks, months or years, it seems certain the rival tour will never get McIlroy and Scheffler, two of the biggest stars in the game not named Tiger Woods.

In April, Scheffler got the upper hand on McIlroy when he won his first major championship at the Masters and McIlroy finished second. On Sunday, McIlroy got even by rallying from a 6-shot deficit over the last 18 holes, the largest final-round comeback in Tour Championship history.

With starting strokes, McIlroy finished 21 under over 72 holes, 1 shot better than Scheffler and South Korea’s Sungjae Im. McIlroy is the first three-time winner of the FedEx Cup; the latest one came with an $18 million winner’s purse.

“They’ve had some hard times this year, but we’re getting through it. That was a spectacle out there today, two of the best players in the world going head-to-head for the biggest prize on the PGA Tour, and I hope everyone at home enjoyed that.”

Even as Scheffler assumed the No. 1 position in the Official World Golf Ranking by winning four times in six starts, the Summer of Scottie still felt a lot like the Summer of Rory.

McIlroy, a four-time major champion, narrowly missed ending an eight-year drought without winning one. After finishing second to Scheffler at Augusta National Golf Club, he came in eighth at the PGA Championship, tied for fifth at the U.S. Open and third at The Open.

McIlroy’s near miss at the 150th Open Championship at St. Andrews in July was the one that was most painful. He entered the final round tied with Norway’s Viktor Hovland for the lead but could manage only a 2-under 70. Australia’s Cameron Smith carded an 8-under 64, including a back-nine 30, and beat McIlroy by 2 strokes.

McIlroy had won twice previously this season, at the CJ Cup @ Summit in October and the RBC Canadian Open in June. But his season would have felt somewhat hollow if he hadn’t taken home the FedEx Cup on Sunday.

That’s why his caddie, Harry Diamond, told him on the 72nd hole on Sunday, “All the good golf you’ve played this year, you deserved this.”

While Scheffler was the best player this summer and deserved to win the season-ending championship just as much, McIlroy’s good work for the PGA Tour extended beyond the golf course.

When LIV Golf began signing several PGA Tour members to contracts, including past major champions Dustin Johnson, Brooks Koepka, Bryson DeChambeau and Patrick Reed, McIlroy was one of the loudest voices defending the PGA Tour. So much so that LIV Golf CEO Greg Norman, a two-time winner of The Open, suggested that McIlroy had been “brainwashed.”

“If you believe in something I think you have to speak up, and I believe very strongly about this,” McIlroy said on Sunday. “I really do. I hate what it’s doing to the game of golf. I hate it. I really do.”

On Aug. 16, McIlroy and Tiger Woods hosted a meeting of more than 20 of the PGA Tour’s top players in an attempt to rally them to stay. While Woods, a 15-time major champion, was the loudest voice in the 3½-hour meeting, McIlroy’s voice mattered more than that of any other player regularly competing on the tour now.

“I know he wanted to win this not only for himself, but for the PGA Tour and really make a statement,” Justin Thomas told ESPN on Sunday. “He’s the second-biggest star we have out here and it’s not like he was just given that title. He’s done that with really great golf and great time and work with the fans. He has a great brand. He does everything you’re supposed to do to be in the position he’s in.”

McIlroy said he didn’t necessarily intend to put himself in the middle of the PGA Tour-LIV Golf battle. He joked that he picked the wrong time to join the PGA Tour’s board of directors.

“It’s been a tumultuous time for the world of men’s professional golf in particular,” McIlroy said. “I’ve been right in the middle of it. I guess every chance I get, I’m trying to defend what I feel is the best place to play elite professional golf in the world. It’s in some ways fitting that I was able to get this done today to sort of round off a year that has been very, very challenging and different.”

McIlroy admitted it has been difficult at times to focus on his game with so much going on around him. This past week, he participated in a board teleconference on Tuesday morning. The next day, he announced a new venture with Woods and the PGA Tour. Their stadium-style interactive golf circuit, TGL, might not directly compete against LIV Golf, but it’s intended to help put more money in PGA Tour players’ pockets. Players will compete on three-man teams for two hours on a virtual course on Monday nights.

And, of course, the PGA Tour’s battle with LIV Golf for the best players in the world doesn’t seem to be ending anytime soon. LIV Golf is expected to announce on Monday that Smith, the No. 2 player in the world, and at least five other PGA Tour members are defecting. They’re expected to compete in next week’s LIV Golf event at The International outside Boston.

“In a way, it’s my life,” McIlroy said. “I don’t really know any different. In all honesty, golf has been the escape for me over the last few weeks. I get inside the ropes, no one can get to me, and it’s my escape from this other stuff that’s going on. But yeah, I guess I’m able to switch on and off pretty well, and I can compartmentalize things.”

McIlroy said it will be “hard for me to stomach” seeing 18 former PGA Tour members who are now competing on the LIV Golf series when he plays in DP World Tour’s BMW PGA Championship, scheduled for Sept. 8-11 at Wentworth Club in Surrey, England. Abraham Ancer, Talor Gooch, Reed and Jason Kokrak are among the LIV Golf players expected to be there.

“That just doesn’t sit right with me. So yeah, I feel strongly,” McIlroy said. “I believe what I’m saying are the right things, and I think when you believe that what you’re saying is the right things, you’re happy to stick your neck out on the line.”

After winning another FedEx Cup on Sunday, McIlroy can raise his head a little higher.

Ahead of a fateful meeting with Tiger Woods, Marcus Byrd scores his biggest pro golf victory
Rory, Reed tied two behind leaders in Dubai
The PGA Tour is debuting a new approach to monitoring rules, and most players probably don’t know about it
23 questions about the Rory McIlroy-Patrick Reed feud, with 23 one-sentence answers
Heavy wind at Torrey Pines for Farmers Open was better for paragliders than golfers