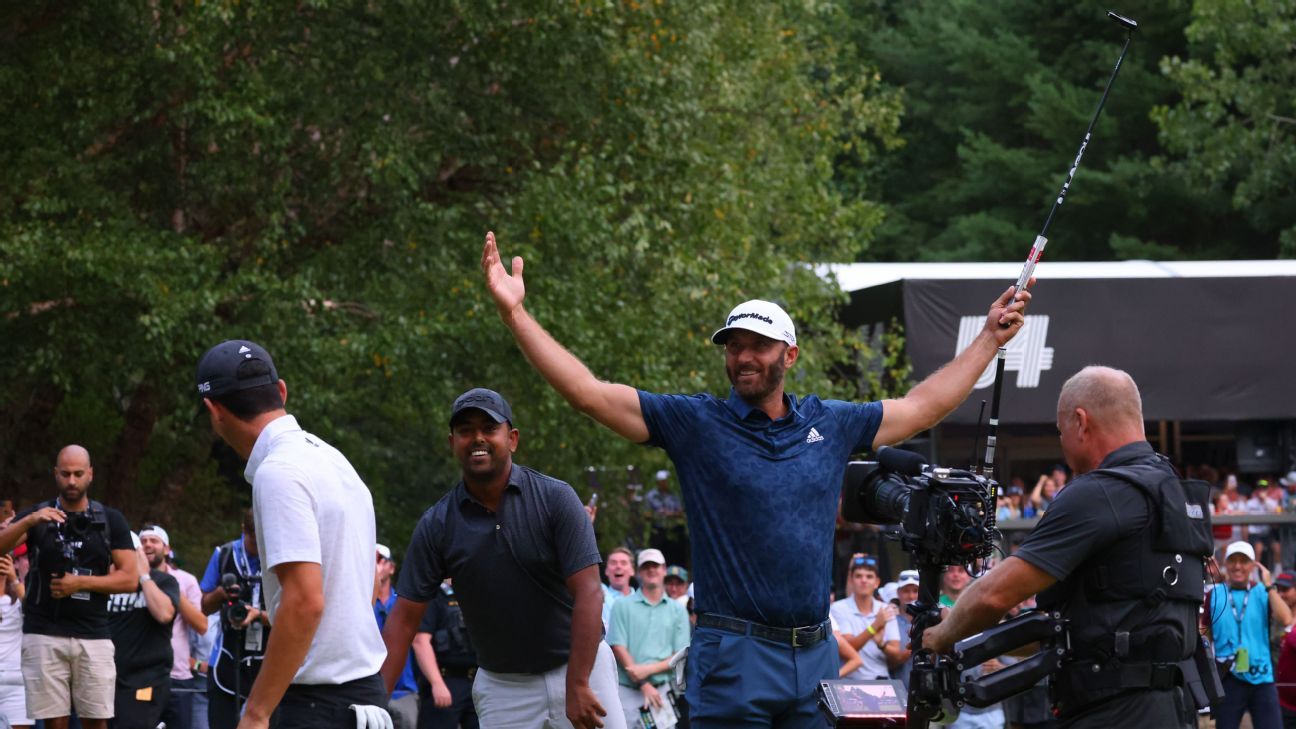 BOLTON, Mass. — Dustin Johnson gave LIV Golf its first big moment on Sunday when he made a 35-foot eagle putt on the first hole of a sudden-death playoff to win the LIV Golf Invitational-Boston for his first victory in 19 months.

Johnson’s putt on the par-5 18th was going so fast, it might have rolled some 6 feet past the hole. But it hit the back of the cup and dropped down near the front of the cup to beat Joaquin Niemann and Anirban Lahiri.

Johnson raised his arm and dropped it for a slow-motion uppercut, instead slapping hands with Austin Johnson, his brother and caddie. The win was worth $4 million for Dustin Johnson. With his team winning again, he now has made $9,962,500 in four events.

“It was going a little fast, but it was a good line,” Johnson said with a big smile. “I got some unlucky breaks [on No. 18] the first time around. It owed me one, and I got it.”

The first playoff in four LIV Golf events capped an otherwise sloppy finish by so many others who had a chance.

Lahiri hit a fairway metal to 5 feet on the 18th in regulation, and his eagle putt that would have won it rolled around the right edge of the cup.

Lee Westwood finished one shot out of a playoff after a 62 that included bogeys on two of his last three holes. He was poised to win when he bounced back from a bogey on No. 1 in the shotgun start with a short birdie on the par-3 second.

He finished on No. 3 — a 352-yard hole and a great birdie opportunity. Westwood hit a lob wedge that was so fat, it came up some 40 feet short of the pin and into a bunker. He blasted out weakly and missed the 18-foot par putt.

“The lob wedge was a little fat,” Westwood said. “Make 3 and I win the tournament, and I make 5. It’s a sickening way to finish.”

British Open champion Cameron Smith, among six players who recently signed with the Saudi-funded league, had a 63. He also was tied for the lead until hitting his tee shot into the trees on No. 1, his 17th hole, and having to pitch out sideways. He made bogey.

Smith tied for fourth with Westwood. Each made just over $1 million.

Johnson had not won since the Saudi International on Feb. 7, 2021, when it was part of the European tour schedule. The player who has been No. 1 longer than anyone since Tiger Woods slipped out of the top 15 in the world when he signed with LIV Golf.

Johnson was part of the rival league from the start in early June outside London, and he has finished in the top 10 in all of them.

“I’ve had a chance to win every one,” he said. “That’s three in a row for the team, and for me to get my first, I’m feeling good.”

He walked off the 18th green holding a phone in a video call to his two sons.

Lahiri and Niemann each made just over $1.8 million for losing in the playoff. They were among six players who signed with LIV Golf after the PGA Tour season ended.

The next LIV Golf Invitational series will take place in two weeks in the Chicago suburbs at Rich Harvest Farms, best known for hosting the Solheim Cup in 2009.

Patrick Reed’s latest rules saga just took its unlikeliest turn yet
Rahm surges at Torrey Pines, within 2 of Ryder
McIlroy vs. Reed in Dubai, Max Homa’s rise and more from the PGA Tour
Heavy wind at Torrey Pines for Farmers Open was better for paragliders than golfers
Rahm struggles with 73, well back at Farmers