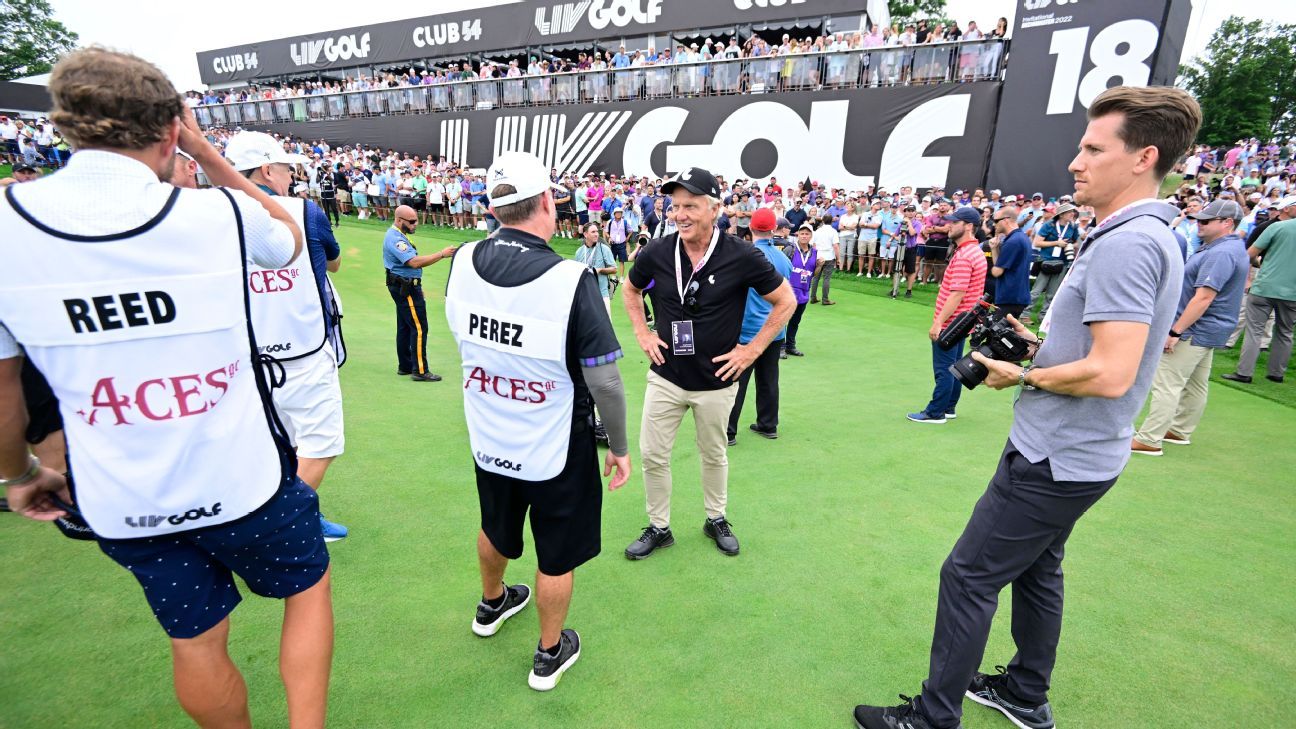 No gambling. No doping. Only moderate alcohol consumption at post-tournament parties.

The new LIV Golf circuit might look like a lot of fun (and money), but the Greg Norman-fronted tour also has plenty of rules and regulations.

The rules and regulations were among the unsealed documents that were released by a federal court in California on Monday. On Sept. 1, U.S. District Judge Beth Labson Freeman partially granted the PGA Tour’s motion to unseal certain portions of LIV Golf’s rules and regulations and its contracts with players. She ruled that LIV Golf could keep the financial terms and other personal information confidential, but ordered the plaintiffs to submit publicly redacted documents.

Here are some of the highlights:

Golfers who play well can extend their contracts

Talor Gooch‘s contract that was submitted to the court was heavily redacted. Gooch was one of three LIV golfers who unsuccessfully attempted to obtain a temporary restraining order from Freeman to compete in the PGA Tour’s FedEx Cup playoffs. Financial terms and other personal information was blacked out in the publicly released version. Gooch signed a two-year contract with LIV Golf for the 2022 and 2023 seasons. A source told ESPN on Tuesday that the longest contract between a player and LIV Golf is through the 2027 season.

The contract specifies that Gooch is an independent contractor “and that nothing in this Agreement may be construed or relied upon as evidence that the League Operator or the Team Operator, as the case may be, is an employer, joint-employer, and/or co-employer of the Player.”

The contract stipulates that Gooch is not subject to relegation until the end of the 2025 season, and that he can decide to extend the contract by finishing at a certain place in the individual points standings. The specific details of where he had to finish in the standings were redacted in the contract released by the court.

According to the rules and regulations, players are prohibited from associating or having “dealings with Persons whose activities have involved trafficking or administration of substances or methods prohibited by the World Anti-Doping Agency, or other forms of doping.”

There are also references to LIV Golf’s performance-enhancing drugs policy and substance abuse policy throughout the rules and regulations. The rules state there are separate dispute resolution procedures for such violations. Players are banned from consuming alcohol and banned substances during on-course activities, and “moderate and responsible consumption of alcohol” after competition and during social functions is permitted.

A LIV Golf source told ESPN on Tuesday that the new league hasn’t yet instituted a drug policy and isn’t testing players for banned substances and recreational drugs. The source said the circuit hoped to have such a program by the 2023 season and fully intends to drug test its players.

The PGA Tour Players Handbook and Regulation says that “all contestants in PGA TOUR events are subject to the terms and conditions of the PGA TOUR Anti-Doping Program.”

There’s a robust disciplinary plan for LIV golfers, according to the rules and regulations. Following an investigation of alleged wrongdoing, which might include on-course etiquette, gambling, drug use or being convicted of a crime, a player will receive an interim written notice that will include a description of the violation, supporting evidence and potential sanctions. The player will have 10 days to submit a written explanation and mitigating factors.

Sanctions can include a reprimand or censure, which will be published in the players’ newsletter, fines between $1,000 and $50,000, suspension from tournaments, expulsion for two years, and permanent expulsion with no right of reinstatement.

The rules and regulations state that “television, radio, film, internet, statistical data and information, and other associated rights, as well as all other media rights, of all Players participating in events forming part of the Series or any other golf event run in conjunction with, or the under the auspices of, LIV Golf, are, in connection with all content that is created, captured, recorded or otherwise generated during or in conjunction with any such events, hereby granted and assigned to LIV Golf.”

While players’ media rights surrounding tournaments are “the property of and expressly reserved by and to LIV Golf,” the regulations don’t “restrict in any way a Player’s right to sell, transfer, or hold, or exploit his individual media rights and, accordingly, the value of his name, image, and likeness.”

Gooch’s contract notes that he “further agrees that the League Operator has the exclusive and unrestricted right in perpetuity (including after termination of this Agreement)” to use his name, image and likeness.

A LIV Golf source said anything a player does in or around a tournament belongs to the circuit in perpetuity. Once the player leaves the event or plays in another event on a different tour, however, there are no restrictions from LIV Golf. He controls and owns his media rights in everything else he does.

Six-time major champion Phil Mickelson, who was among the first players to defect to LIV Golf, said the PGA Tour’s “obnoxious greed” regarding players’ media rights was one of the reasons he was looking to play somewhere else.

“It’s not public knowledge, all that goes on,” Mickelson told Golf Digest in February. “But the players don’t have access to their own media. If the tour wanted to end any threat [from Saudi or anywhere else], they could just hand back the media rights to the players. But they would rather throw $25 million here and $40 million there than give back the roughly $20 billion in digital assets they control. Or give up access to the $50-plus-million they make every year on their own media channel.

“There are many issues, but that is one of the biggest,” he continued. “For me personally, it’s not enough that they are sitting on hundreds of millions of digital moments. They also have access to my shots, access I do not have. They also charge companies to use shots I have hit. And when I did ‘The Match’ — there have been five of them — the tour forced me to pay them $1 million each time. For my own media rights. That type of greed is, to me, beyond obnoxious.” While LIV players have more freedom to compete in other circuits, LIV Golf still controls the shots Mickelson was referring to in its tournaments.

If a player withdraws from a LIV Golf tournament after hitting at least one shot, he will receive 50% of the prize money awarded to the last-place finisher ($60,000) but will not receive individual points. If a player pulls out after the first round, he will receive the full amount for the last-place finisher ($60,000) but no points. The player’s team would continue competing as a three-man squad.

A player who is disqualified from an individual competition for, say, using an illegal club, having too many clubs in his bag or signing an incorrect scorecard, “may continue to compete in the Team competition for any rounds subsequent to the round in which the disqualification occurred.” The player’s score for the round in which the disqualification happened cannot be counted in a team’s score.

There’s no gambling on the LIV Golf circuit

LIV Golf’s rules and regulations strictly prohibit gambling and full compliance with code of conduct and anti-corruption provisions. The rules state that each participating player agrees to “not gamble (whether directly or indirectly) in connection with any Tournament, event or any other golf match or competition and shall not manipulate or unlawfully influence any results or statistics.”

Players are also prohibited from providing “any nonpublic information to any Person for gambling or wagering purposes.” Players caught doing so will face immediate discipline, including permanent expulsion from LIV Golf events.

The rules and regulations state that a player “shall not have any financial interest, either directly or indirectly, in the performance or the winnings of another Player in any Tournament approved or otherwise sanctioned by LIV Golf and/or the Asian Tour or any other regulatory body, whether through purse splitting, Prize money “insurance,” financial assistance, bets or otherwise.” Players are required “to give his or her best efforts in competition” and can’t “bribe, gift, pay, reward or otherwise give anything of value to any Player with the intention of influencing his or her efforts in a golf tournament or similar event.”

Under the rules, LIV players are obligated to report to Norman “any known or suspected bribe, gift, payment, reward or other offer for anything of value, or any agreement or acceptance or bet.”

According to Gooch’s contract, if a LIV golfer retires before his contract expires, he must “continue to comply with any reasonable non-playing requests from the League Operator or Team Operator relating to the League or Team, as applicable, including duties relating to team captaincy, promotion of the league, fulfillment of media obligations and attendance at Events (including with respect to wearing and displaying Team Apparel.”

The very last item in the rules and regulations, rule 9.14, states, “All players are permitted to participate on as broad and diverse a cross-section of global golf events as possible, so long as such participation does not interfere with the Players’ obligations to LIV Golf.” Like on the PGA Tour, LIV golfers aren’t permitted to play on other tournaments if they conflict with LIV Golf events. They don’t have to obtain conflicting-event releases from Norman, like PGA Tour players do to play in other non-PGA Tour tournaments.

“The League views participation of the Players in Other Events as a major benefit to the promotion of the game of golf worldwide,” the rules and regulations says.

Davis Love III reflects on a scintillating Presidents Cup and the essence of team competition
This Q School DQ might be the most painful DQ story we’ve ever heard
A rare window into Lydia Ko’s life away from the golf course
Tour pro shoots 67 in first official post-wedding round, drops perfect line to his wife afterward
Bryson DeChambeau nearly pulls off epic upset in long drive World Championships