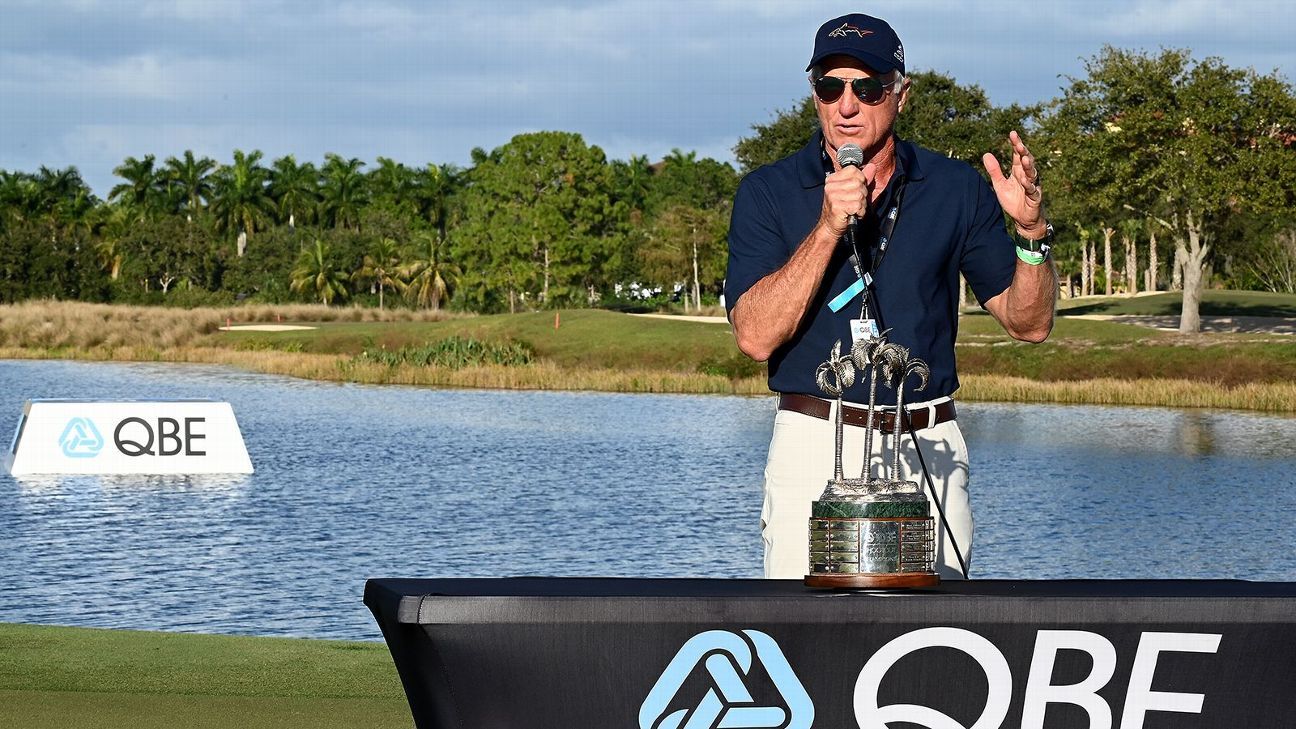 LIV Golf CEO and commissioner Greg Norman said Tuesday that he has been asked not to attend the QBE Shootout, an event he founded and has hosted since 1989.

The 54-hole competition between two-man teams will be held at the Norman-designed Gold Course at Tiburon Golf Club in Naples, Florida, on Dec. 9-11.

“Sadly, after 33 consecutive years of playing in and hosting every Shootout tournament — a co-sanctioned PGA Tour event — since I founded it in 1989, this year I have been asked not to attend,” Norman wrote on Instagram. “Why one might ask? Perhaps it is because I am helping to give golf a new heartbeat, creating new value and delivering a new product that is loved by players, fans and broadcasters alike. And in doing so, finally giving players their rights as independent contractors to benefit from their performance and brand. In some people’s mind this is too disruptive and evolution is perceived as a bad thing. I disagree – competition breeds excellence.”

QBE Shootout director Rob Hartman said the tournament had been talking to Norman about his role for months.

“As we got close, ultimately the decision was made that he was going to step back and really let the focus remain on our tremendous charitable partners,” Hartman told the Naples Daily News. “When he started this event 34 years ago, it was all about charity then and it’s all about charity now. Greg just made the decision that he didn’t want anything to distract from that.”

In July, the R&A decided not to invite two-time winner Norman to the 150th Open Championship celebration at St. Andrews. The R&A said it hoped that Norman would be able to attend again in the future “when circumstances allow.”

LIV Golf, financed by Saudi Arabia’s Public Investment Fund, joined a handful of its players as a plaintiff in a federal antitrust lawsuit against the PGA Tour last month. The plaintiffs have accused the PGA Tour of improperly suspending golfers for playing in LIV Golf events, and unlawfully using its monopoly power to squash competition.

“Change is good,” Norman wrote Tuesday. “Evolution and innovation of the professional golf product has been needed for decades — just ask the next generation of golf fans.”

According to Norman, the QBE Shootout has raised more than $15 million for charities.

“These charities, their missions and the financial benefits they receive from Shootout tournament donations each year is of the utmost importance to me and my family,” Norman wrote. “As such, I have decided not to attend this year’s event so the focus can remain on the missions at hand.”

Norman founded the tournament, then called the RMCC Invitational, at Sherwood Country Club in Thousand Oaks, California. It was later called the Shark Shootout and moved to Naples in 2001.

At the 1994 Shark Shootout, Norman met with PGA Tour players behind closed doors to discuss his concept for a new World Tour. The plan included the top 30 to 40 players competing in eight events with $3 million purses. He reportedly had secured a 10-year commitment from Fox to televise the tournaments. Norman’s proposed league never got off the ground.

At the time, the PGA Tour said in a statement that it would block its members from competing in World Tour events “by enforcing our television release and conflicting events regulations.”

Ahead of a fateful meeting with Tiger Woods, Marcus Byrd scores his biggest pro golf victory
PGA Tour seeks to add Saudi fund to LIV lawsuit
Heavy wind at Torrey Pines for Farmers Open was better for paragliders than golfers
Here’s the prize money payout for each golfers at the 2023 Farmers Insurance Open
McIlroy snubs Reed, in no mood for reconciliation