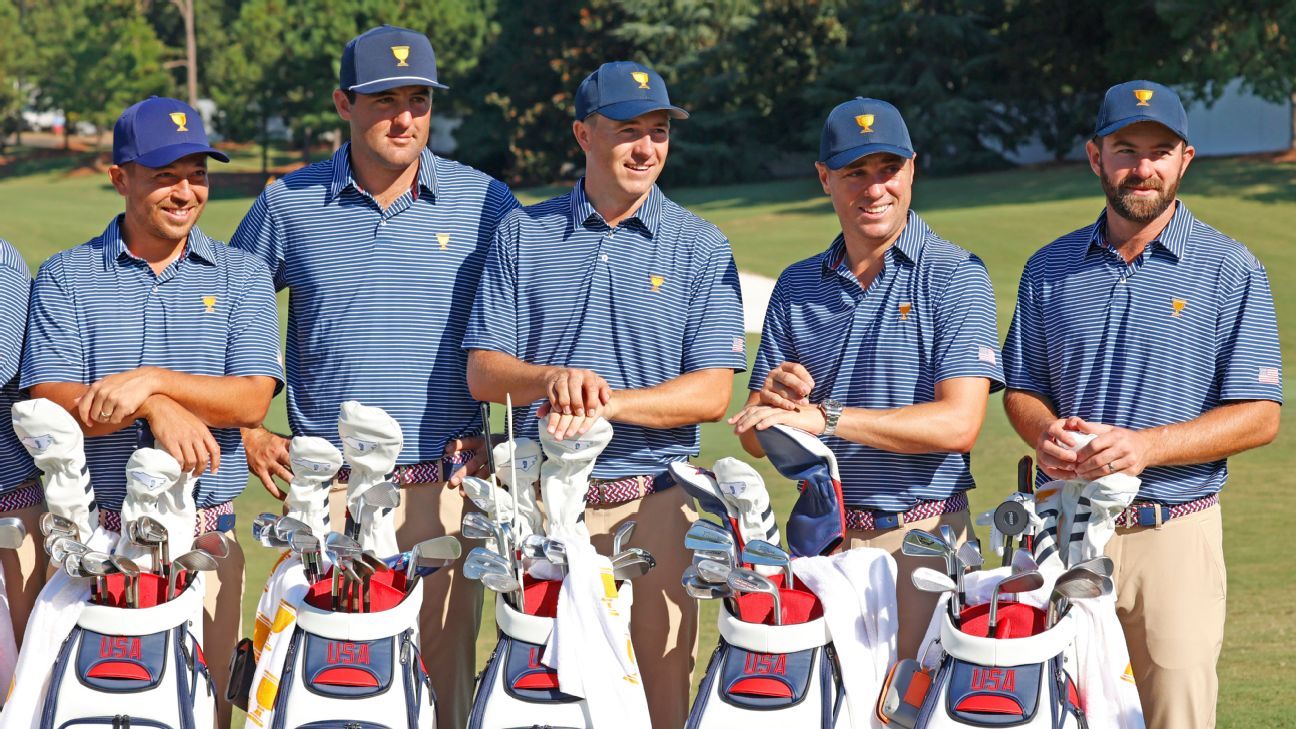 After a three-year hiatus, the 2022 Presidents Cup has returned.

The U.S. team faces off against the International team in a matchup between golf’s best. Right now, the U.S. team is a big favorite, boasting world No. 1 Scottie Scheffler, No. 4 Patrick Cantlay, No. 5 Xander Schauffele, No. 7 Justin Thomas and No. 9 Collin Morikawa, among others.

International team captain Trevor Immelman had to scramble after several players, including world No. 2 Cameron Smith, moved to LIV Golf. Still, players such as No. 17 Hideki Matsuyama, No. 19 Sungjae Im, No. 22 Joohyung “Tom” Kim, No. 26 Corey Conners and No. 30 Adam Scott are no slouches.

Though the competition will undoubtedly be fierce, the Presidents Cup is a charitable affair. As such, we can expect a bit of a lighter tone than we would, say, on a Masters Sunday at Augusta National.

Here are some of the more fun moments we’ve noticed as they tee off Thursday at Quail Hollow Club in Charlotte, North Carolina:

Bouncing back in a big way 🎯 @Collin_Morikawa and Cameron Young take back the lead in Match 3 @PresidentsCup. pic.twitter.com/2Xc21VPS6i

The wind is howling at Quail Hollow Club, as a storm system is starting to blow through Charlotte. Xander Schauffele just had to remove his hat before hitting his second shot from the No. 13 fairway. Temperatures have been in the mid-90s for much of the week. The passing cold front is supposed to drop temperatures by nearly 20 degrees; forecasts call for high temperatures of 75 degrees on Friday.

The Justin and Jordan show

The pairing of Justin Thomas and Jordan Spieth is working out early in their match against Sungjae Im and Corey Conners. On the first hole, Spieth hit his tee shot into the left rough. JT made a 7½-footer to save par. On the next hole, Thomas hit his tee shot into the pine straw, leaving Spieth with a tricky recovery shot off a bad lie. He knocked it to 10 feet. Then, on the par-3 fourth, JT somehow chunked his tee shot, leaving the ball about 44 yards from the hole. Spieth, one of the best scramblers in the game, knocked the second shot to about 4 feet. As Spieth walked up to the green, JT patted himself on the back. The U.S. squad was 2-up through five holes after a birdie on No. 5.

Jordan Spieth drops it in close with an impressive approach from the pine needles on 2. 🎯

It didn’t take U.S. team rookie Cameron Young to make an impact. Playing with Collin Morikawa in the third match, Young, one of the longest hitters on the PGA Tour, crushed a 306-yard drive down the middle of the No. 1 fairway. After Morikawa hit the second shot to 25 feet, Young nearly holed out from the fringe. They made par and halved the hole.

Jack Nicklaus was captain of the U.S. Presidents Cup team four times and Gary Player captained three squads. Nicklaus was the captain in 1998, which is the only time the Americans have lost this event.

For years, AOL Instant Messenger was the way to communicate with friends online. Almost everyone who used it probably remembers what they used for a screen name. American golfer and No. 20 Max Homa chose … “nexttigerwoods59.”

That’s the perfect encapsulation of what those screen names were like — goofy, a little lofty, ultimately charming. Scottie Scheffler, on the other hand, did not have an AIM name at all — and he had a great explanation as to why not.

Some honesty from Scottie Scheffler 😂 pic.twitter.com/4eXtJpKvPD

Ryder pulls away, Rahm heats up at Torrey Pines
This club pro has a spot in the PGA Tour’s next $20 million ‘designated’ event. Can Michael Hopper cash in?
The APGA is back on TV at Torrey Pines and will celebrate a minority golfer’s victory
The PGA Tour is debuting a new approach to monitoring rules, and most players probably don’t know about it
Rahm surges at Torrey Pines, within 2 of Ryder