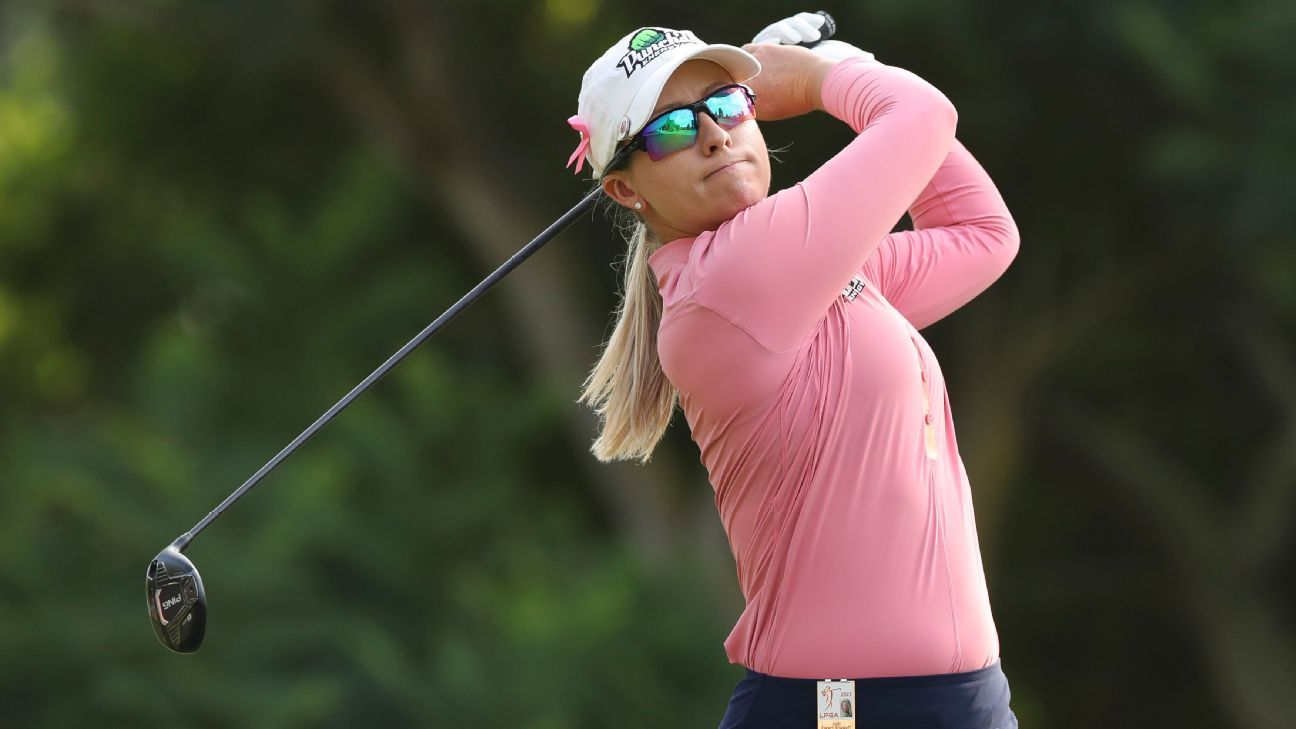 CAMARILLO, Calif. — Jodi Ewart Shadoff went on a run of four straight birdies late in her round Thursday for an 8-under 64, taking a 2-shot lead in the LPGA Mediheal Championship.

Ewart Shadoff has played 245 times on the LPGA Tour without winning, but she got off to a strong start in hopes of ending more than a decade in search of an elusive title.

“I just felt really relaxed today,” she said. “Everything was just kind of flowing. I was just rolling it really well with the putter. Just helps when everything is just gelling together.”

Alison Lee and Ruixin Liu of China were at 66, while the group at 67 included California native Danielle Kang and Atthaya Thitikul, the 19-year-old Thai who is on the fast track toward reaching No. 1 in the world.

Thitikul won two weeks ago in Arkansas and could have gone to No. 1 by winning last week in Texas, but she stalled and finished fourth.

Thitikul showed no signs of slowing on The Saticoy Club, a century-old course in Ventura County designed by William Bell.

“I do like the challenging things in golf,” Thitikul said. “When challenge come to you it’s like it’s another test. It’s another experience that [you’re] going to get. And then if you play in challenging course then you know how your game is.”

Ewart Shadoff, a 34-year-old from England who played college golf at New Mexico, began her round on the par-3 10th with a birdie. She was going along steadily until a 3-wood to 10 feet for eagle on the par-5 14th hole.

“That eagle really kick-started my round,” Ewart Shadoff said. “Then just kind of got hot from there.”

Her lone bogey came on the first hole with a poorly struck 7-iron, and then she poured it on with birdies down the stretch, two of them on par-5s.

At No. 44 in the points race, Ewart Shadoff is in good shape to reach the season-ending CME Group Tour Championship in November. The top 60 make it to the final event. This is the final domestic event for a month on the LPGA, with two tournaments in Asia before returning for the final two events in Florida.

“Being able to shoot a low round like today definitely helps to boost my confidence and going forward,” Liu said.

Kang went to school at Pepperdine and her gallery included her brother, Alex Kang, who plays on the Korn Ferry Tour. Kang revealed this summer at the U.S. Women’s Open that she has a tumor on her spine, though she has not talked about the treatment.

She returned after being out for more than two months and showed flashes in Arkansas two weeks ago with a runner-up finish. Now she is just over the foothills from where she went to college and has a good feel for the course.

“I gave myself a lot of opportunities all day today, and I could read these greens pretty well. I’ve been around here,” Kang said. “So there is a lot of double breakers, a lot of putts that break more than two, three cups. I was just trying to go with my feel.”

LIV Golf’s 2023 schedule includes former PGA Tour stops, Trump sites and season-ending Saudi Arabia event
Architect Gil Hanse scores first ‘real’ hole-in-one on a course he designed and the tale of how it happened is incredible
‘What if’ game will haunt Davis Thompson after brutal birdie miss off flagstick costs him at the Amex
Reed leads McIlroy in wet Dubai Classic
Heavy wind at Torrey Pines for Farmers Open was better for paragliders than golfers