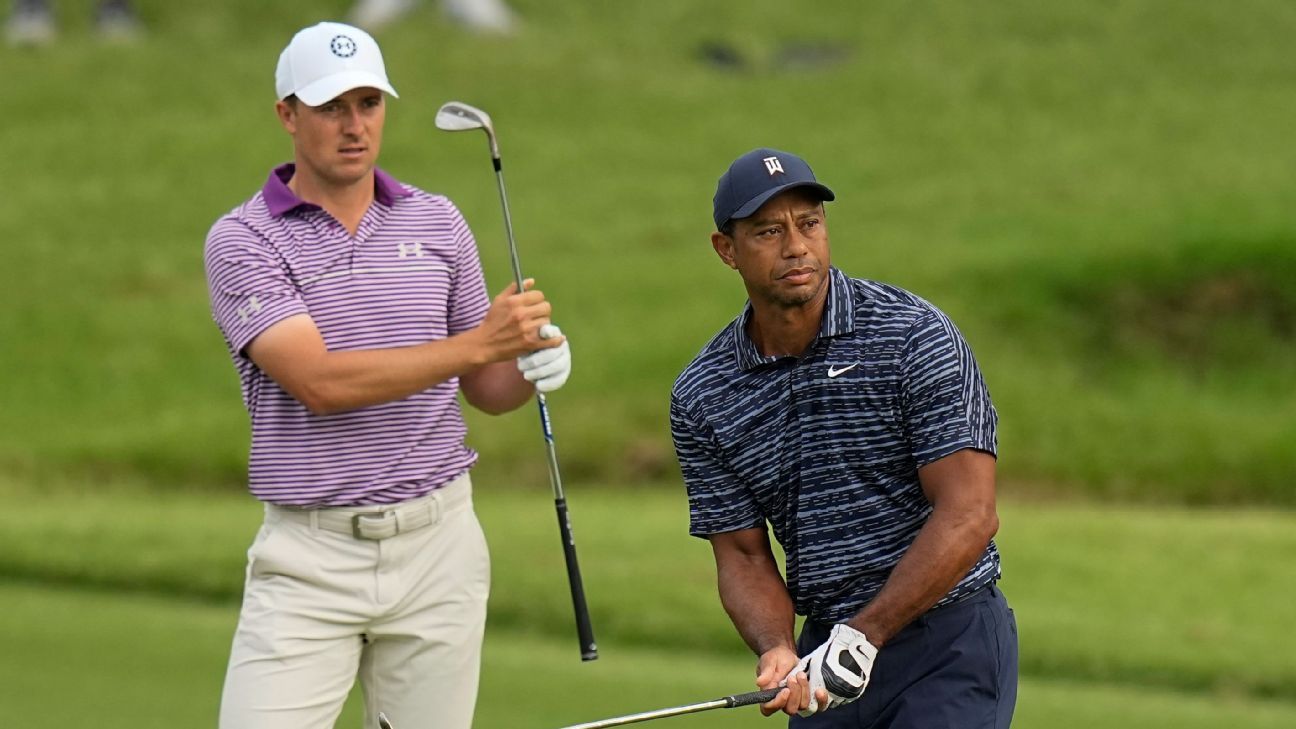 If you were hoping for the venom of a Phil Mickelson–Tiger Woods showdown in previous iterations of The Match — or certainly what a rematch might bring today — then Saturday night’s made-for-TV clash featuring Woods and world No. 1 Rory McIlroy against Jordan Spieth and Justin Thomas might seem more like a pillow fight.

During a 30-minute news conference on Zoom ahead of the 12-hole match at Pelican Golf Club outside Tampa, Florida, one thing was abundantly clear: These guys really like each other.

“If you told myself and JT in 2012 when we were in college that we’d be playing against these two in a match, that would be a really, really cool thing,” Spieth said. “We want to win it because of how much these guys inspired us.”

Woods, 46, has competed in two previous editions of The Match. It will be the debuts for McIlroy, Spieth and Thomas.

Woods, a 15-time major champion, plans to compete even as he is struggling to recover from plantar fasciitis in his right foot. He was forced to pull out of last week’s Hero World Challenge in the Bahamas, which benefits his foundation, and told reporters there that doctors advised him that the painful condition is related to injuries he suffered in a car wreck outside Los Angeles in February 2021.

Woods said being able to use a golf cart will help him tremendously, and that “it’s just hard getting from point A to point B.” He competed in only nine rounds in three majors last year. His last start was a missed cut at the 150th Open Championship at St. Andrews in July.

Golf fans will certainly be happy to see Woods swinging a club again. He also plans to play with his son, Charlie, in next week’s PNC Championship in Orlando, Florida. Woods will again be able to use a cart in that 36-hole event.

With former NBA great Charles Barkley once again providing commentary during The Match, there figures to be plenty of humor. And it’s hard to imagine that there won’t be a few jabs at LIV Golf and its CEO and commissioner, two-time Open winner Greg Norman, during what might be an infomercial for the PGA Tour. Last week, McIlroy told the Independent of London that he plans “to make it my business now to be as much of a pain in [Norman’s] arse as possible.”

While the golfers are friendly competitors, McIlroy says none of them like to lose.

“I’ve been on the wrong side of them in the Ryder Cup before I’m trying to get one back on them,” said McIlroy. “I couldn’t ask for a better partner. The partner I had against them previously doesn’t quite compare to the one I’ll have on Saturday night.”

The 12-hole match will start at 6 p.m. ET and be played under the lights. It’s a best-ball format, in which each player plays his own ball on holes and the lowest score of the two players counts as the team score.

“I can tell you one thing: I’ve got the No. 1 player in the world on my team, so I’m good,” Woods said. “He’ll have the best cheerleader he’s ever had.”

McIlroy is expecting more from his teammate.

Thomas and Spieth are slight favorites (-130) over McIlroy and Woods (+110), according to oddsmakers at Caesars Sportsbook.

There figures to be plenty of friendly trash-talking starting with the first tee shots.

“They’re both quick and witty,” Spieth said. “I was saying to Justin that we might have to take the nice guy route, which isn’t normal for us in these types of matches.”

Steve Stricker wins by 6 shots in Hawaii and the rest of the Champions Tour should be very afraid
Jon Rahm finally cools off, Taylor Montgomery’s historic putting continues, and a trio of huge underdogs lead
The Farmers Open will have another Saturday finish, and Justin Thomas jokingly makes the case for more short weeks
These are the two wackiest breaks you’ll ever see a tour pro get (in back-to-back holes!)
Stricker wins Champions event in Hawaii by 6